A Model of the Marion Shovel "The Mountaineer"?

A couple weeks ago we took a family trip and along the way ended up in Marion, Ohio for a couple hours of railfanning.

In front of the Marion station is a restaurant called "The Shovel". My wife commented that was an odd name for a restaurant. After thinking about it and noticing the cartoon machine shovel on the sign, I told her it was named for the old Marion Power Shovel Company which probably had it's factory nearby.

For those who don't know, the Marion Power Shovel Co. and the Bucyrus-Erie Co. produced some of the largest earth moving shovels in the United States. Some were used by mining companies, including Hanna Coal, to strip the earth away exposing the seams of coal below. Many of the Hanna mines on the Nickel Plate Road's AC&NA branch, were actually strip mines excavated by these types of monsters.

The Marion Shovel, "The Mountaineer" was built in 1955-56 for the Hanna Coal Co. At 16 stories tall and weighing 2750 Tons, this machine supposedly started the super shovel era. Hanna and its successor Consol would later have several more of these types of shovels prowling the southern Ohio coal fields in Harrison and Belmont Counties.

"The Mountaineer" is best known to some NKP fans by publicity photos taken by LIFE Magazine and the railroad's own photographer Willis McCaleb.

Shortly after it's completion on site near the Hanna Coal offices and shops on the AC&NA branch, the shovel was poised next to NKP (ex W&LE) Berkshire 819 and it's coal train. The opportunity was used to show the massive proportions of the shovel next to the now tiny in comparison steam engine.

Here's a link to a Google search that shows a couple dozen views from that day that I had never seen before.

After coming home from Marion, I wanted to search online to see if anybody had made a model of "The Mountaineer" in any kind of scale, mostly out of curiosity. Trying to fit an HO scale model of one on the layout would take a ridiculous amount of space. When building these shovels however, the parts were shipped by rail and any models or sources for model parts might make interesting freight car loads for the layout at least.

The only model I found was an all brass HO scale model of one of the giant Bucyrus-Erie shovels for $6000! It's limited run of 125 was sold out too!

But for a "The Mountaineer" model there wasn't anything. Well almost...

One person had made "The Mountaineer" out of LEGOs!

I grew up on LEGOs as a kid, and my son is also growing up on LEGOs. So we were blown away enough to somehow have to post it here. Plus anyone reading this with a connection to Hanna Coal or the Cadiz, Ohio area hopefully will get a kick out of it as well.

A young man from Switzerland, Beat Felber, built this huge functional 1/28 scale model of the Marion shovel from nothing but LEGOs. You can read all about his methods and find more pictures at his own website.

Comparing his work with the real thing I think he did a fantastic job! 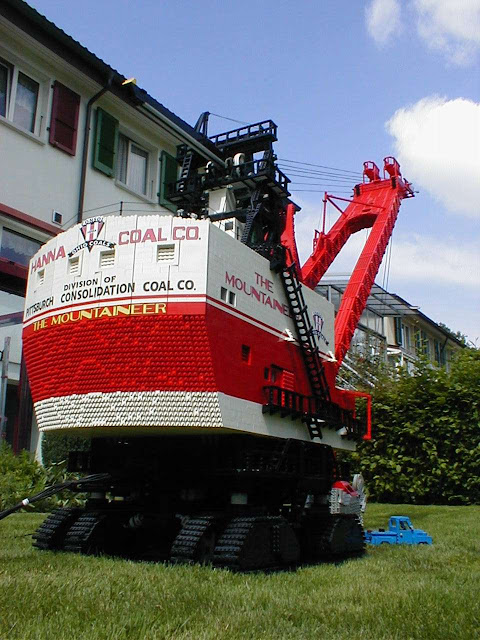 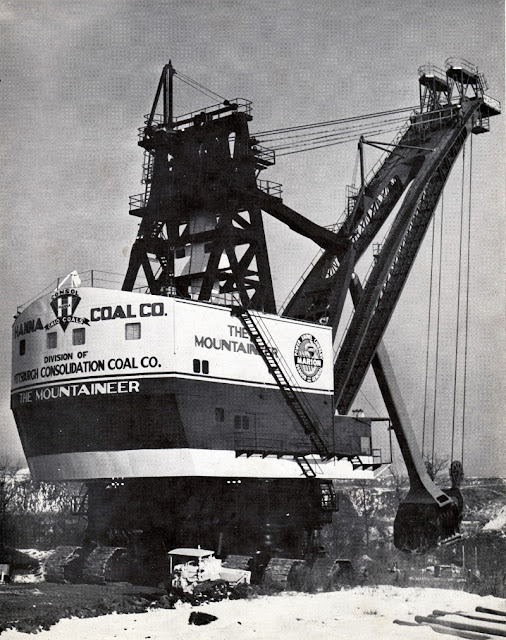 Thanks for sticking around and reading this short diversion from pure trains and modeling talk!
Posted by Chris Ellis at 2:25 AM

Email ThisBlogThis!Share to TwitterShare to FacebookShare to Pinterest
Labels: Coal Mining, Other