Back in July, Brendan and I had the honor to visit with Jim Talbott and see his excellent modern day Wheeling & Lake Erie layout which was featured in Model Railroader's Great Model Railroads 2015.

Jim models the Wheeling mainline from Brewster to the steel mills at Mingo Junction along with Norfolk Southern and CSX run through trains.

Living a couple blocks from the W&LE's Akron line has helped make the orange and black my son's favorite railroad and in turn has grown on me as well. So when the GMR issue came out Brendan and I were thrilled to see the Wheeling make it into a modeling magazine. Little did we know Jim would start reading this blog and extend an invitation to visit his layout. Finally this summer the need for new bedroom furniture for Brendan and Jim's close proximity to an Ikea store provided the foundation for a quick one day road trip.

We arrived at Jim's after lunch and after a quick tour we were both set up with trains to run. 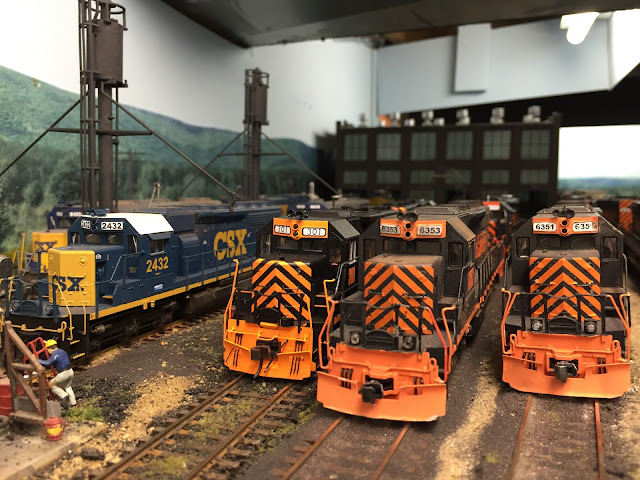 The engine terminal was busy with the Wheeling's large fleet of SD40-2s and a few CSX locomotives. What really sells the scene as Brewster Yard is Jim's representation of the large brick shop building with its tall banks of windows. 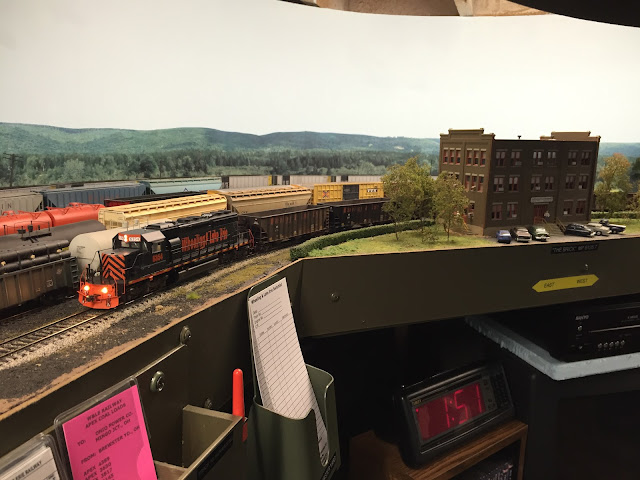 Jim had a push-pull train of hoppers set up for me to run from Brewster to Mingo Junction. I got on my train right next to the Wheeling's imposing brick headquarters building which is appropriately nicknamed "The Brick". Having seen the building several times I can say Jim did a great job modeling the structure. 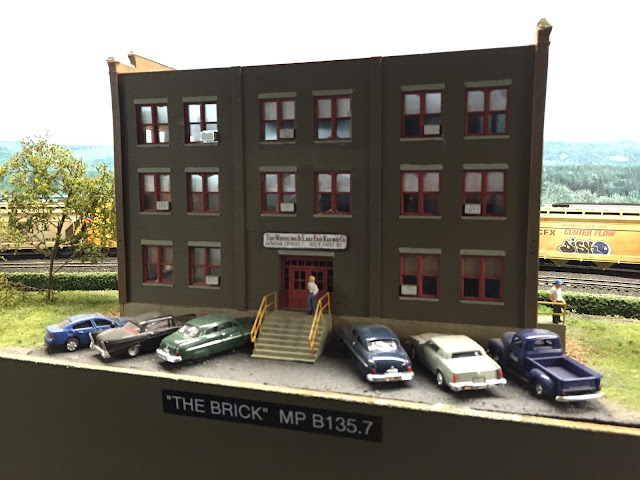 At the same time Brendan had his own train to run from Mingo Jct. to Brewster. Being that the Wheeling was a single track mainline, a meet was planned for us to pass at Bowerston. 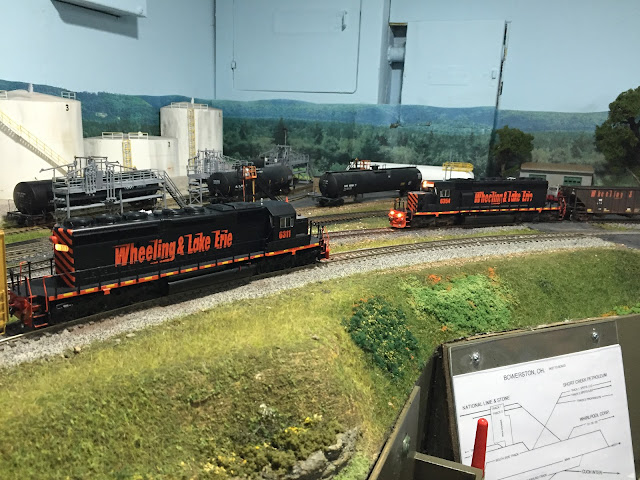 I met Brendan's train at Bowerston and proceeded onward to Jewett passing by a large gravel operation. 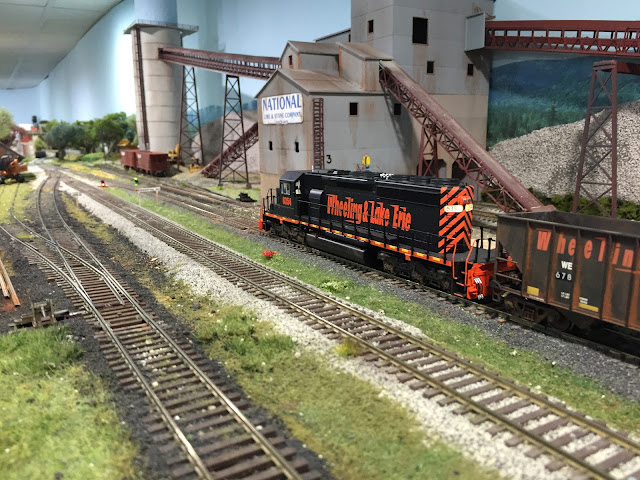 Jim was quick to point while the route we were taking is real and the towns are in the correct order, he had to add a lot of industry that doesn't exist to provide work for the trains along the way. Today on the prototype there simply isn't much rail served industry between Brewster and Pittsburgh. Even the Steel Mill at Mingo was closed by the late 2000's, hence Jim setting the date at 2006. 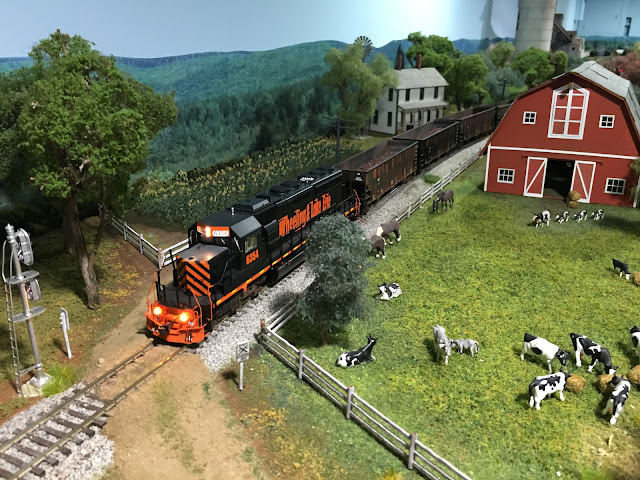 On the way to Jewett is a fantastic farm scene that was also featured in the GMR magazine. This is very typical of the farms that populate the rolling hills of SE Ohio and was my favorite spot to photograph on Jim's layout. 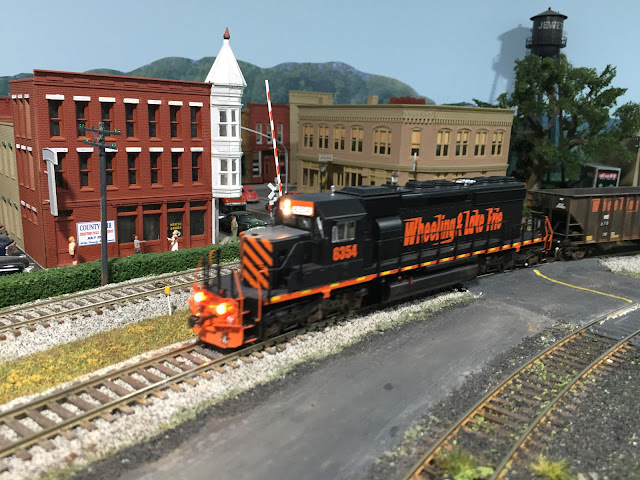 Passing through Jewett and onward past Pittsburgh Junction to the large steel trestle at the Nelms Mine. 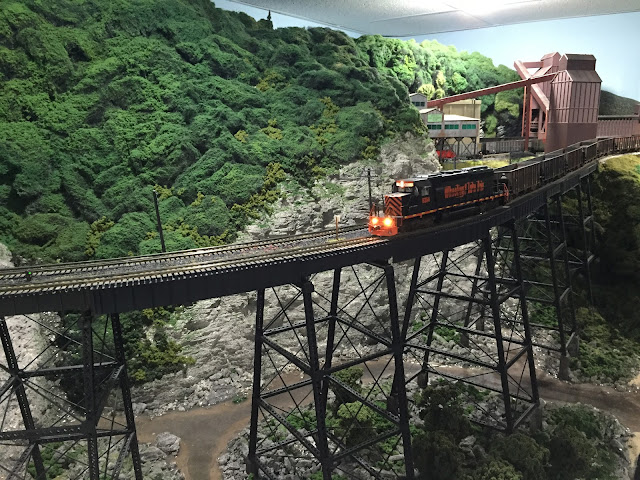 No offense to the the Leigh Valley layout on the cover of GMR 2015 but the bridge at Nelms or the farm scene should've been the one to make the cover photo. Jim told us it was close but Cornell Red beat him out in the end. This dramatic bridge scene was probably my son's favorite place on the layout. 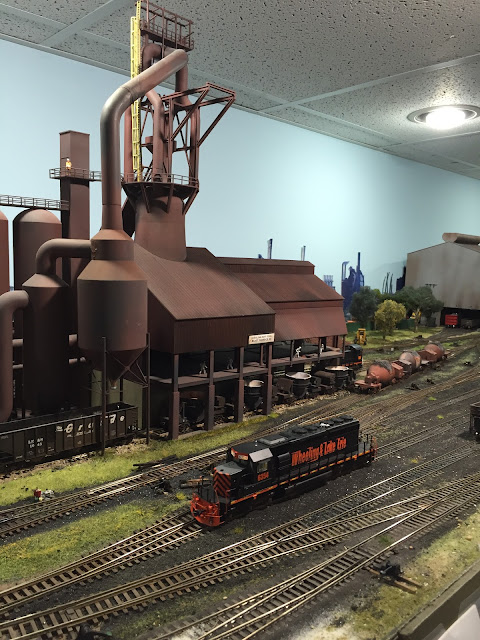 I arrived at Mingo Junction and set my hoppers off in the yard. The Steel Mills dominate the scene and if you've ever seen these industrial complexes along the Ohio River you'll feel right at home here. 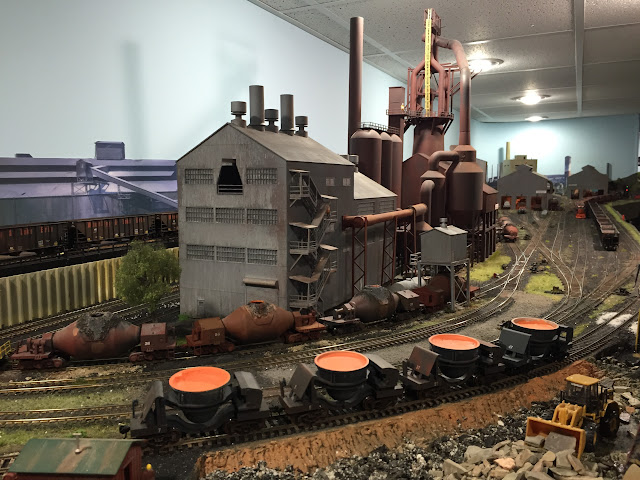 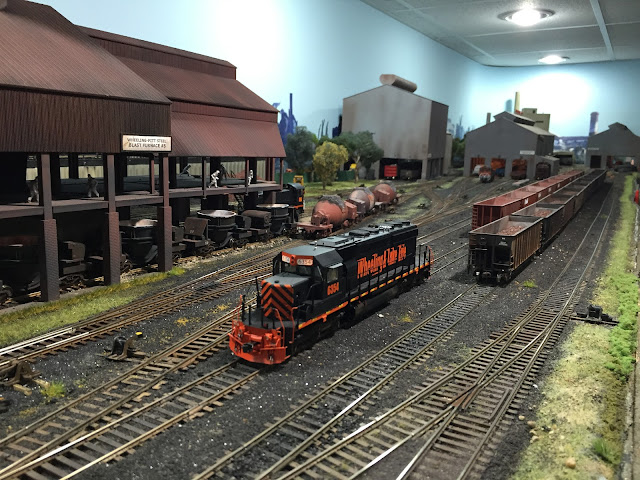 After dropping off my hoppers full of ore for the furnaces, I picked up a string of empties for the return to Brewster. 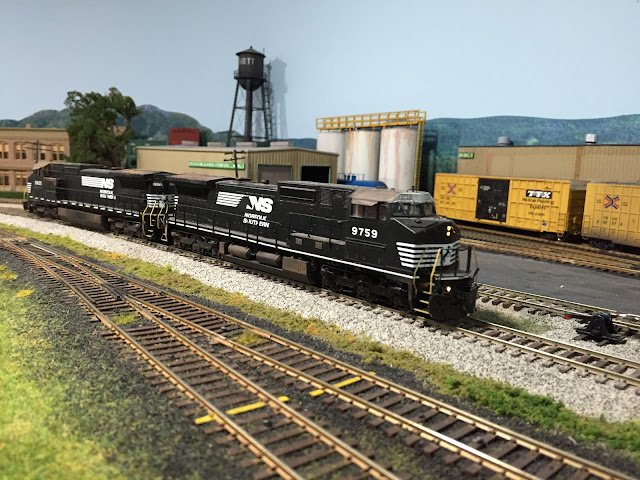 In the meantime Brendan ran some Norfolk Southern GE's lite from Pittsburgh Junction to Brewster to pick up a train. 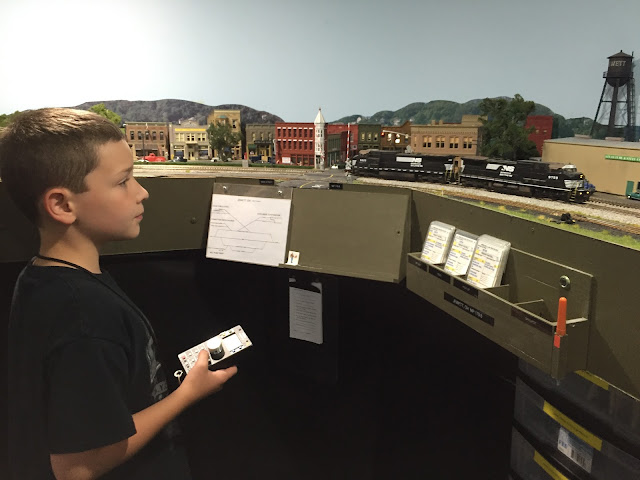 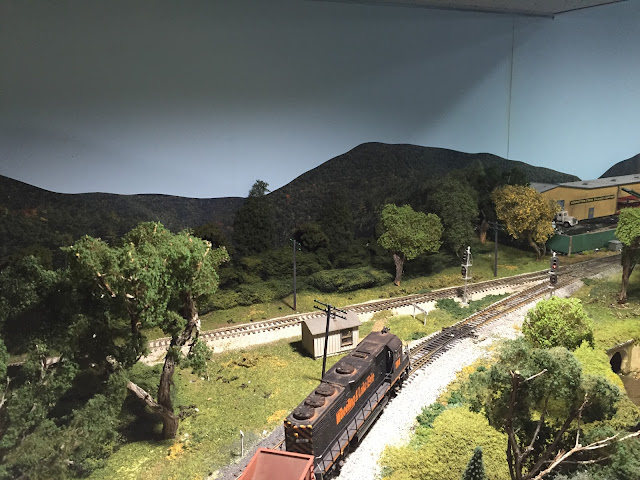 Approaching the fully signaled Pittsburgh Junction with my train of empties. 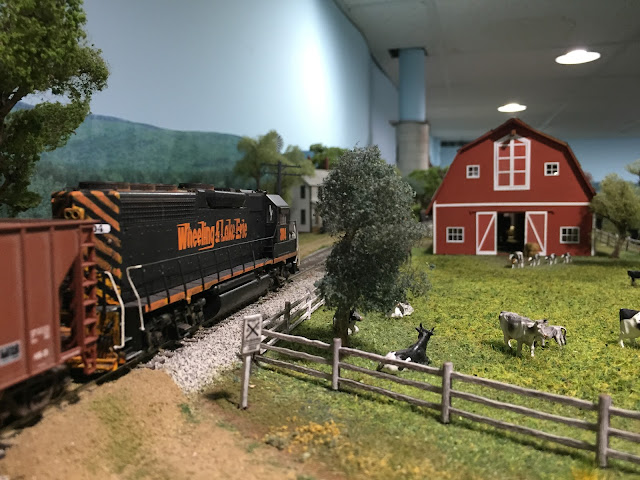 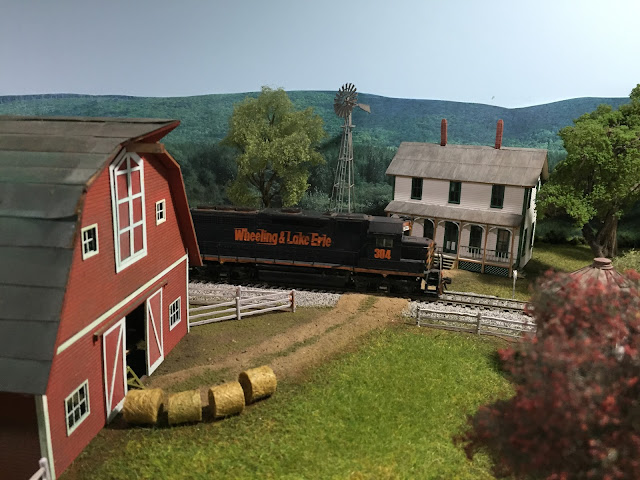 Obviously I can't get enough of the Farm! 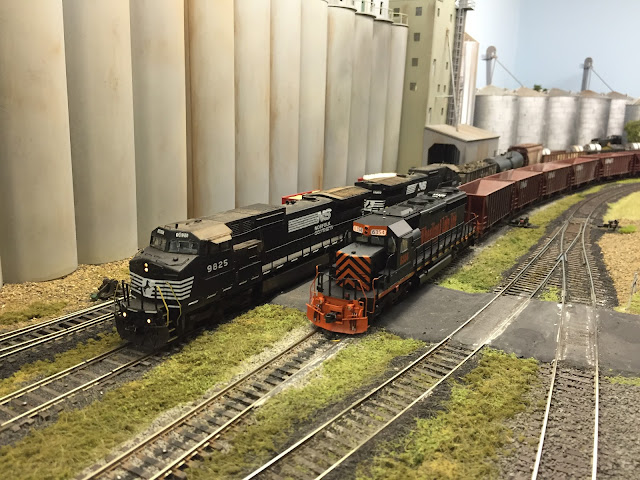 Back at Brewster Jim has a huge Grain Facility inspired by a similar large facility on the west end of the Wheeling near Norwalk. Brendan's NS units have their train and are headed back to Pittsburgh Junction to staging. 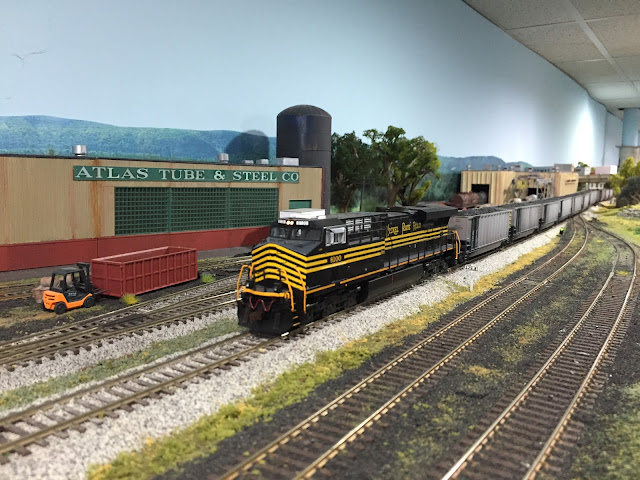 Lastly as a special treat, Jim brought out the Nickel Plate Road Heritage unit for a coal train that Brendan and I took turns running to the power plant at Mingo Junction. 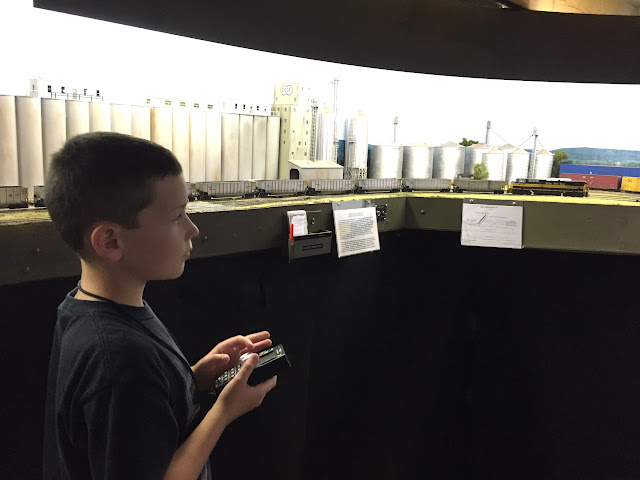 While running trains Jim and I talked about his old Nickel Plate Road layout which was pretty much what I'm trying to build now, hauling coal on the old Wheeling! He described the track plan, mines , operations and even the flaws that would eventually help design the present layout. He still had his fleet of NKP diesels and steam engines from that layout patiently awaiting a call for a mine run. I was happy to hear how my blog helps Jim vicariously relive his previous layout through my efforts to recreate the same NKP/Wheeling coal operations. At the end of our stay Jim surprised me by giving me one of his NKP Geeps from his old fleet and also gifted Brendan with a modern Wheeling hopper car.

I'm always surprised by the kindness and appreciation from others I've  received for writing this blog. In the past I've wondered what kind of an impact this blog creates on people. I see the page views and the statistics but its usefulness is harder to judge most of the time. What I've discovered is that writing these posts and sharing old photos has given me the opportunity to make new connections with great people and modelers like Jim. That alone makes me happier than any gift could, but I was more than happy to put that Geep to work. It's already pulled a few test trains with two other sister Geeps.

It's visits to great model railroads and the people that build them that help inspire and keep me going in times when I go down to the basement and sometimes just see a pile of pink foam. 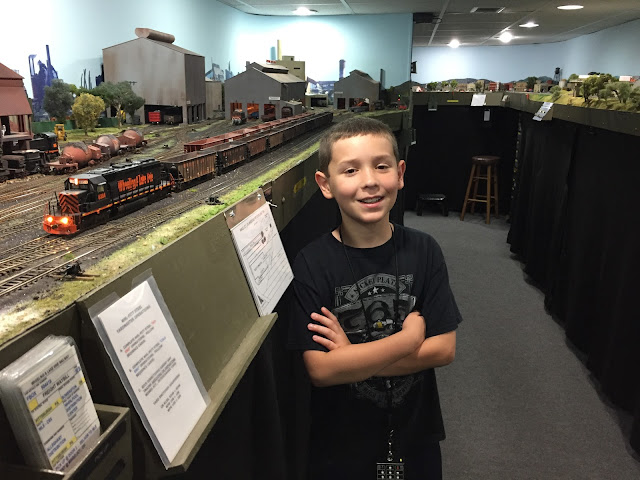 Thanks again for having us Jim!
Posted by Chris Ellis at 8:48 PM