If you haven't been over to JJ Young Jr.'s Flickr page lately, get on over there and check out all the NKP Wheeling District Steam action that's been uploaded over the last week or so.

There are some really fantastic views of the places I will be modeling and others I hope to one day given a larger basement! Sadly leaving comments have been disabled on his photos now, as it was nice to identify the places for other viewers. Many photos are from Martins Ferry/Terminal Junction, Mingo Junction, Dillonvale/Pine Valley Yard, Adena (wye bridge!), Kenwood, Warrenton, and Yorkville. Shoot me a email or message if you want to know where a certain photo was located.

One of my favorites so far is this view of Adena Yard. It looks to be a cool, rainy early/late winter day. The smoke and mist obscure even the hills that rise from the valley. The Maintenance building on the left doesn't yet have it's addition that possibly replaced the small train order office to the right. I've never seen a photo before of this building minus the office addition that will take up the spot where the truck is parked. The Safety sign hung on the side of the building is news to me as well. I knew of the "Thinking Prevents Accidents" sign propped up against the old depot as seen on my Blog Title Photo, but not this second sign.  I wonder what it says beyond the obvious "Safety" at the top?

Another favorite is the two photos of Berkshire 712 heading out westbound on a mine run. The first picture has the 712 crossing bridge 192.13 which happens to look like this today.

What's neat to me is that signal in the background, I didn't know there was one at that location. A closer read of the 1956 NKP Wheeling Division Timetable would've revealed it's existence on it's list of ABS signals. This makes two signals at either end of the Adena wye which will introduce me into the complex world of engineering a model railroad signaling system! Yay?

That second photo of Berkshire 712 is the going away shot from bridge 192.13 as it heads westbound into the Adena Tunnel. Cool stuff!

There are so many others I could mention but take a look and find your own favorites!

Also mixed into the middle of the most recent NKP stuff are some great photos on very late PRR/early Penn Central action on the Horseshoe Curve and other Pennsy areas.

Update 5/25: 6 more photos of NKP action posted sometime today. More shots in Yorkville at the Mill, Mingo Jct Yard taken from the P&WV bridge, the 943 probably at Dillonvale and a Berk getting orders at Warrenton.

It's been a wild few weeks since my last real construction update. I finally landed a new job working in the IT department of large national retailer. This starts what I hope to be a long and rewarding career in the IT field. This also means I haven't had much time to work on things as I settle into a new schedule but I've managed to get a little work done.

To advance the construction in the Adena Yard area I needed to cut and glue down the foam panels I'm using for the track and scenery base. I used DAP Paneling & Foam adhesive that I stocked up on while back during a Sears Hardware going out of business sale in my area. 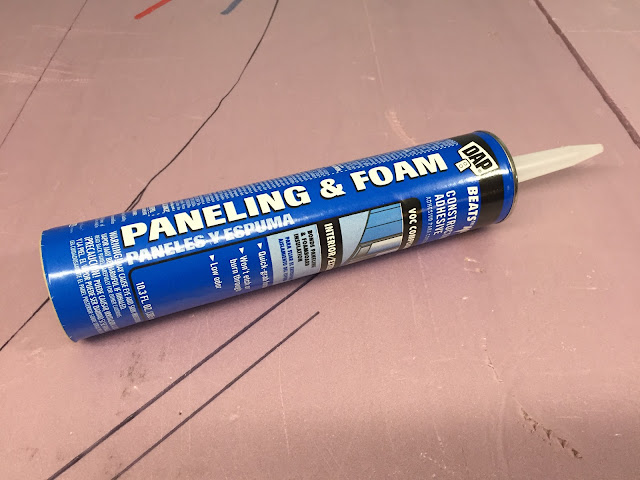 I laid a bead of adhesive on my wood supports and spread it with a grooved putty knife. I probably used more than what was necessary because I went though the first tube pretty fast.

In front of the gas meter I cut the paneling so in the future that part of the layout could be removed if the gas company needed greater access. Lets hope not. This section was glued down, but I figure I'll just slide a knife under the foam if the worst case scenario occurs.

The rest of the job is pretty self explanatory, the foam paneling was cut with a utility knife, glued in place then covered with anything heavy. My wife's collection of workout weights and several paint cans came to the rescue to hold the foam flat on the supports as the adhesive dried. You wouldn't expect this characteristic from foam but one of my panels had a slight bow across its width. 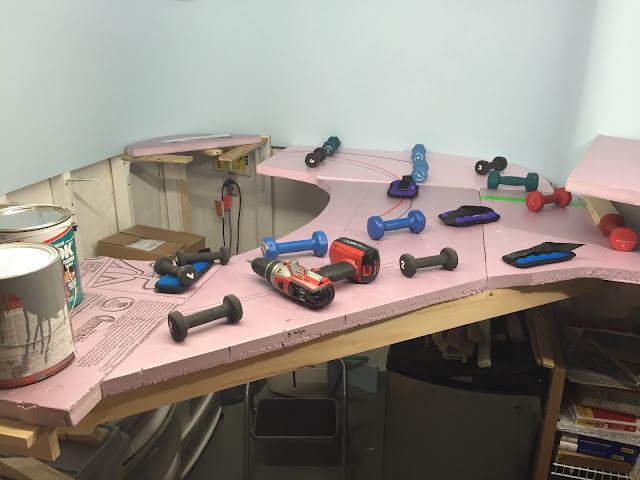 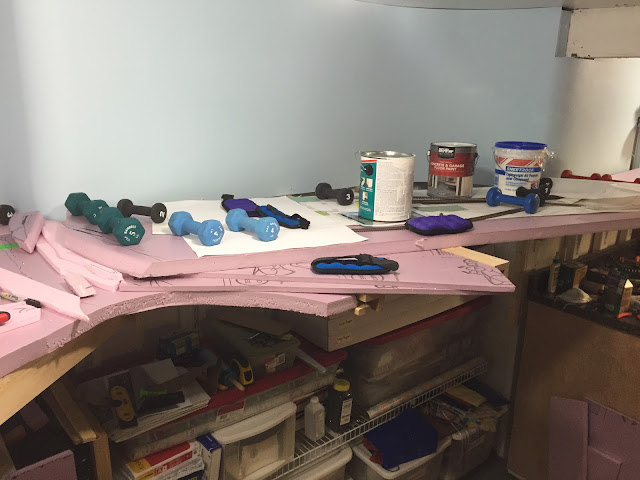 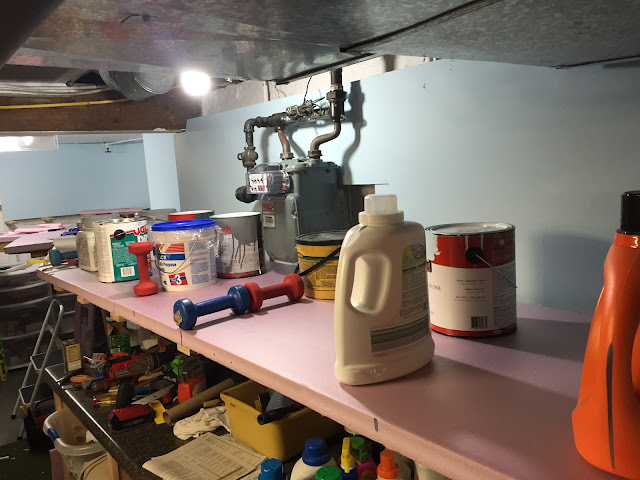 The next update I hope to have the foam built up to track level in the large wye area and the mainline laid through Adena. I'll also show off the rubber transmat material I plan on using for yards and other multi track areas.
Posted by Chris Ellis at 7:00 AM No comments: 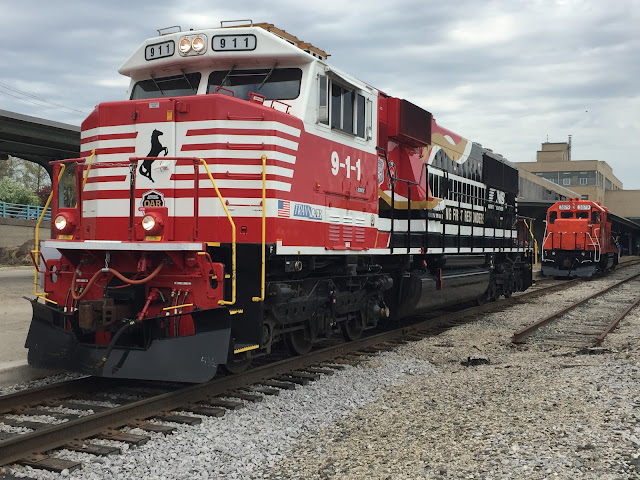 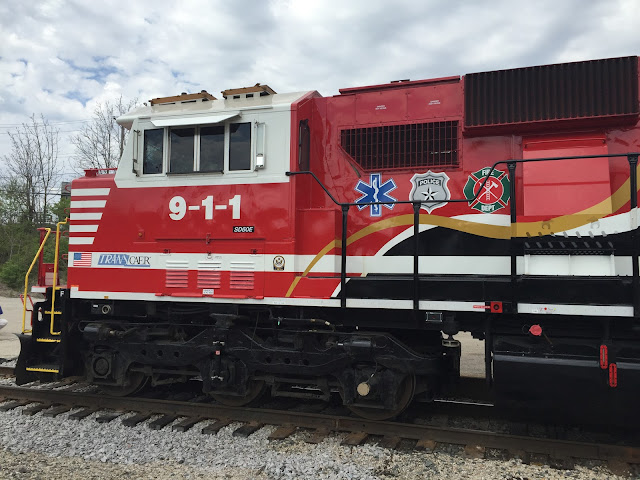 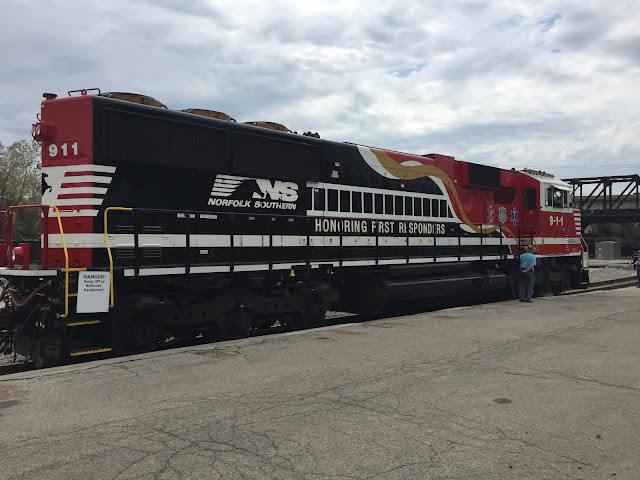 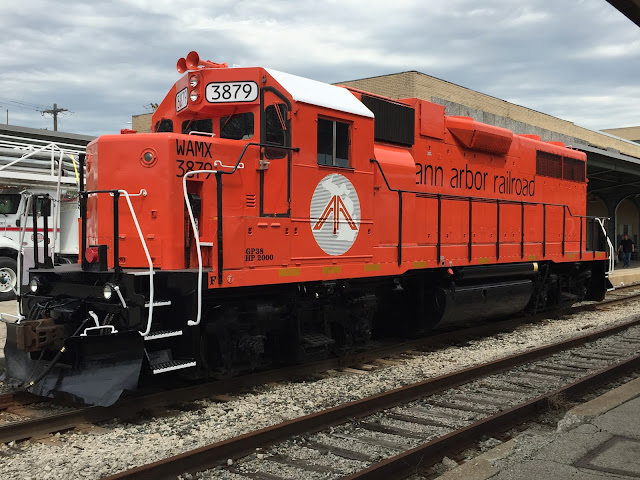 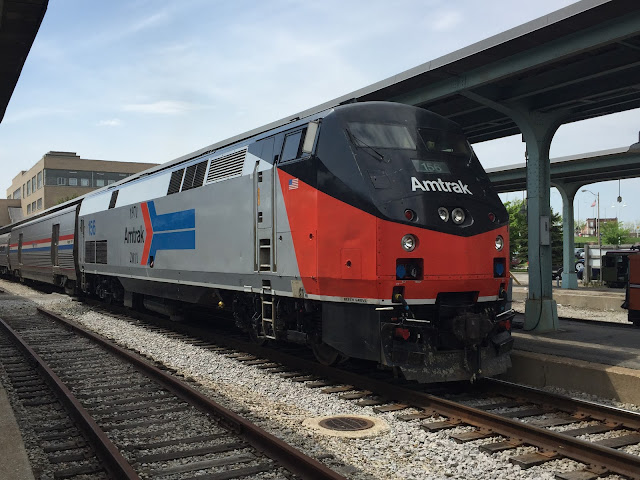 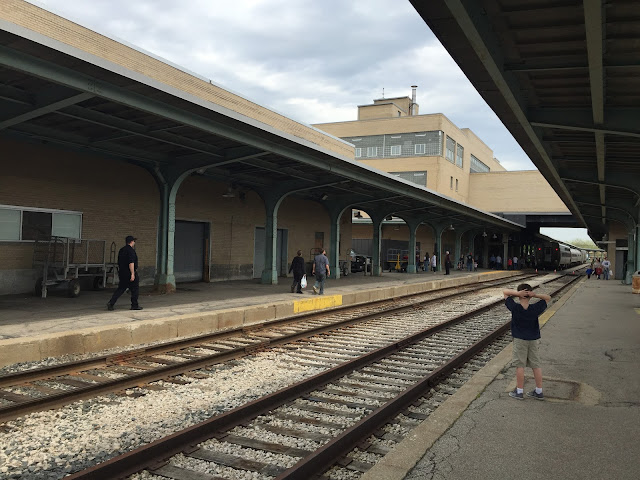 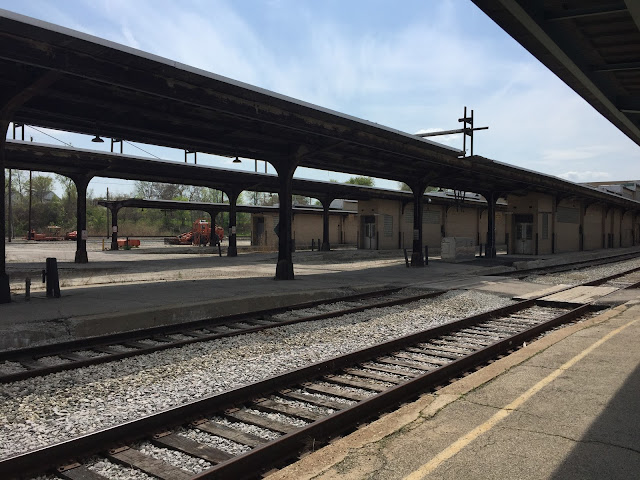 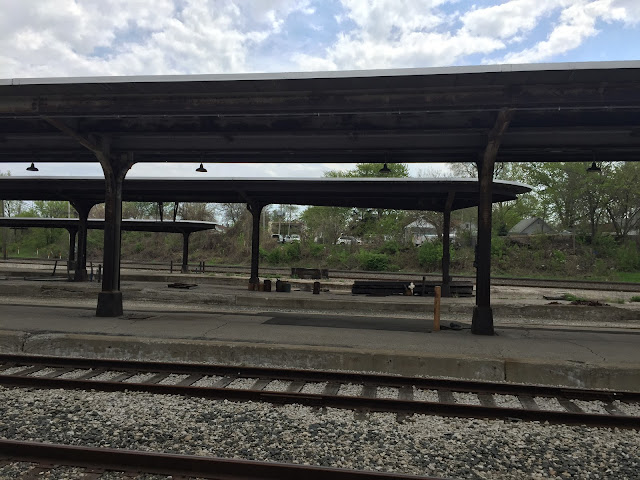 While we only stayed a few hours, we all had a good time and got to see another part of Ohio's extensive railroad history.
Posted by Chris Ellis at 10:36 PM 1 comment:

Upgrading the Athearn RTR SD40 with an iPhone 4 Speaker

When I first tried out my two N&W Athearn RTR SD40's with Soundtraxx DCC sound, I was happy with their performance and detail but felt the speakers left much to be desired. Most factory equipped sound units have speakers or speaker enclosures that can't produce a rich sound with at least the impression of low frequencies. I'd seen online where people using cell phone or tablet speakers have had surprising success making their model train engines sound more like the real thing. This thread in Model Railroad Hobbyist and others furthered my interest in these small speakers that might help my N&W SD40s sound more like their big brothers.

Last week I finally bought a couple iPhone 4 replacement speakers off eBay for $2.00 each to experiment with. Today they arrived so I installed one of them, took some pictures and made a comparison video to share along the way.

The iPhone 4 speakers were way smaller than I thought which gave me hope they would easily fit inside the SD40's long hood. I guess I've forgotten how tiny the iPhone 4 was since getting my iPhone 6.


From the moment I temporarily hooked up the iPhone speaker to the SD40's decoder I was blown away at the amount and quality of sound this little thing was producing! And this was without the engine shell enclosing the speaker which would only help deepen the diesel sound.

Now for the video comparison, but first some disclaimers!


In my opinion the factory speaker sounds really high pitched compared to the fuller more dimensional sound of the iPhone speaker. For only $2.00 the iPhone speaker was a big upgrade that will only get better once I play with the decoder settings. Especially once I lower that volume! Wow Athearn, let's revisit some of those factory settings!

I know some people disagree with using cell phone/sugar cube speakers over traditional cone speakers for sound fidelity reasons, but for tight installs and based on my what's left of my ears, this two dollar speaker wins hands down!

I do have some iPhone 5 speakers on the way to try out also. I've seen some mixed reviews on those in modeling forums, so I'll be sure to report my findings as well.
Posted by Chris Ellis at 2:05 AM 8 comments: