As a result of Ohio's Stay At Home Orders and the completion of my bathroom remodel, I've been able to put more time than usual into getting construction of the layout back on track.

Several weeks ago I was lucky enough to score a nicely priced used NCE Pro Radio setup. My current NCE PowerCab was adequate for the moment but I knew it was not going to be able to handle future layout additions without an upgrade.

I installed the NCE Command Station under Pine Valley yard connected to its own power strip so turning off the layout would be a simple flip of a switch near the stairs going up. I do need to find a good home for the radio antenna but for now it's working just fine sitting nearby the Command Station.

When I replaced the removable layout sections between Adena and Pine Valley Yard I not only added a backdrop seen in my previous post but I also added a turnout for a short spur leading to a coal mine truck dump. This small tipple was located just east of Adena Yard at this location. In the NKP Physical Data Book from 1954 this loading location was called the Toni #1 mine and was operated by the Bedway Coal Co. and the Amber Coal Co. The Toni #1 mine loaded 2,106 cars in 1953 which works out to 5 or 6 cars a day.
With the layout back in working order after adding the new DCC system upgrade and my first coal tipple spur, my son Brendan pointed out that we should have a operating session. Given the current situation it was a great idea for something new and different we could do and also act as a small proof of concept test for the layout.

East of the Adena Wye I have about 15 feet of track loosely installed mostly for some extra running room. For an operating session this track would act as "Brewster staging" and could hold two trains of empty hoppers eastbound for Adena. These timetable extra trains would drop off their empty hoppers at Adena, Herrick or Pine Valley for the mine run jobs to then take to the area mines. After dropping off their empty hoppers these extra trains would then pick up about 50-60 loaded coal hoppers at the Adena marshalling yard and head back to Brewster. On a copy of a train dispatchers sheet from May 25th 1950 I counted seven of these trains bringing in around 300 empties to Adena/Herrick Yards and hauling out 402 loaded coal hoppers back to Brewster.

Brendan wanted one timetable fast freight so he made up a westbound train of boxcars and gondolas which I mistakenly named it #81 out of Mingo Jct (it should've been #87). Since there is no staging yard yet that represents the Ohio River destinations (Mingo Jct and Terminal Junction/Martins Ferry) our #81 had to sit in Pine Valley Yard and wait for the two Adena bound empty hopper trains to first leave the mainline staging east of Adena.

Also called out of Pine Valley today was a helper to assist trains up the westbound grades, a mine run to work the new Toni #1 mine and a Pine Valley roustabout to switch the freight house, pull cabooses and other duties.

Brendan and I spent a evening staging the trains and car spots on the layout and called it a night.

The next day after dinner I talked my wife Jessica in joining us which was probably her first time running anything serious on the layout. About 30 minutes before we were going to start I realized I needed some kind of job aid for people to follow! So I quickly threw together cards for each job describing what duties the train was expected to perform. Future paperwork for the trains will be vastly better but this op session was hastily organized and only a family affair.

I brought in the first train of empties into Adena Yard as extra #763 while my wife took the helper Extra #688 to Adena to wait for westbound trains to assist. Brendan worked the Pine Valley roustabout readying a cut of cars for my 763 to grab after a set out and take back to Adena. This is where the first real trouble started. With the Timetable Freight #81 taking up one of three yard tracks and the others full of cars, as soon as Extra 763 entered the yard it was instantly clogged. There was no where for the 763 to run around and leave with a cut of cars. This won't be a problem when the east end Ohio River staging yard is added in the future.

Brendan and I worked our way out of the clogged yard situation and soon Extra 763 returned to Adena Yard. Brendan took Extra 772 with more empties into Adena yard to clear the mainline west of Adena. I coupled the 763 up to a string of loaded coal hoppers and followed my orders to wait for extra 772 and #81 to pass by.

While the 772 was getting settled with its train of loaded hoppers and orders to wait for #81, Jessica crewed the brand new SD-9 #358 to power #81 to Brewster.

Once #81 reached the end of the line east of Adena we were surprised to find an hour and a half had quickly passed by and called it a night. I'm always amazed at how fast time can pass when immersed in any kind of operating session.

The next day Brendan and I finished up by running extra 763 and 772 west out of Adena and quickly clogged up the mainline all the way to he Adena wye. If we do this again I'll have to add another track or two as temporary westbound staging.

I had Brendan run mine run extra #942 so he could work the new mine spur. Extra #942's job card called for grabbing 4 empties at Adena, setting those out at the Toni #1 mine and pull any loaded hoppers, set those loads out at Adena and return to Pine Valley taking anything headed that way with it.


Overall I'd call the hastily organized op session a success since most importantly we had fun! Although if I'd kept a list of problems encountered (tip for next time) I bet it would've been at least a page or two long. Aside from needing to get some kind of turnout control in place, there were some derailment problems with two yard turnouts, probable wheel gauge issues in several cars that apparently escaped a basic checkup, an engine that suddenly didn't want to run and another engine that needs a not Bachmann better decoder installed.

As I was writing this blog post Ohio Governor DeWine has called for a extension to the stay at home order until at least May 1st. Looks like the layout will get some extra attention for even longer.

While I was reenforcing the ends of the removable layout sections which allow for maintenance of the furnace and water heater, I decided it was also a good time to add the backdrop.

Originally I planned to use 16" Aluminum Flashing for the entire length of the scenic portions of the removable sections, however I found the flashing difficult if not dangerous to work with. For example when cutting open the roll I underestimated how compressed it was and had it spring through my hands unwinding itself like a coiled spring. Thankfully nothing got sliced as now is certainly not the time to be going to the hospital.

Unfortunately after attaching the flashing to the large bridge module with screws my son Brendan and I both agreed it looked terrible, too wavy and rippled. The back side of the removable section is very curvy which also made things difficult aside from handling the aluminum sheeting. 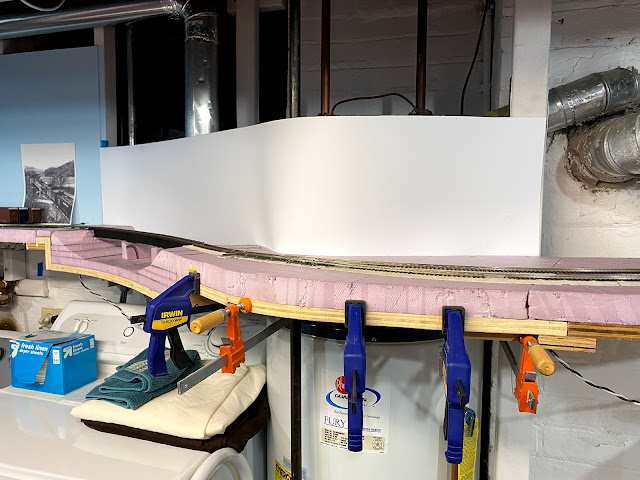 After the glue set the section was removed from the layout again and a piece of aluminum screwed to the back to act as a sort of heat shield from the water heater's exhaust pipe. 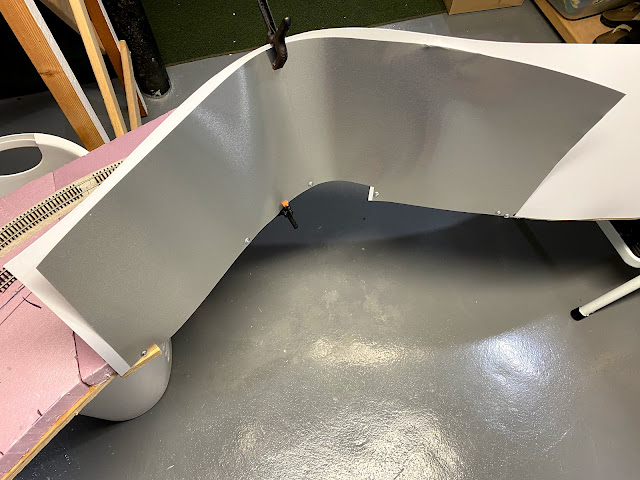 The next part of the backdrop would have to be aluminum as it would come in close proximity to the furnace exhaust. Luckily other than a cut out around the exhaust, the rest was simple. 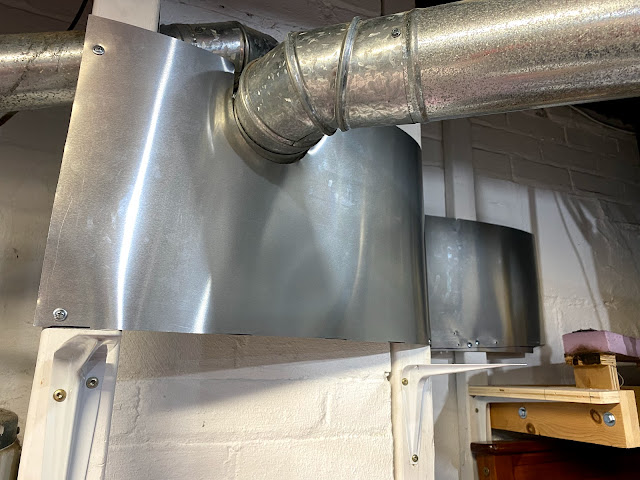 My long running bathroom remodel project mentioned in a previous post has been completed! At least 98% complete enough to finally get back to work on the layout.

Here's some pictures of all the hard work. 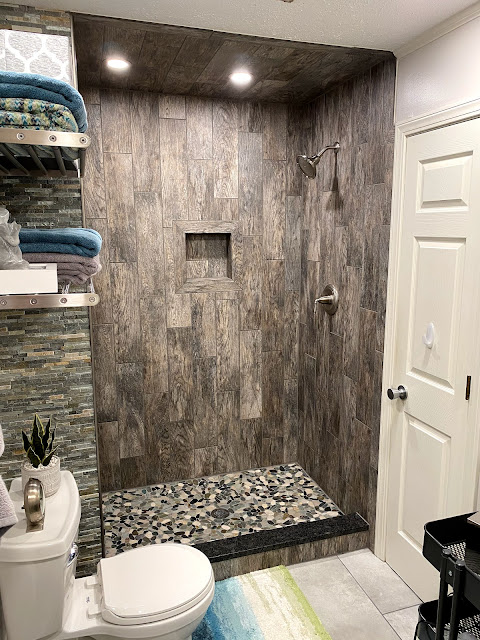 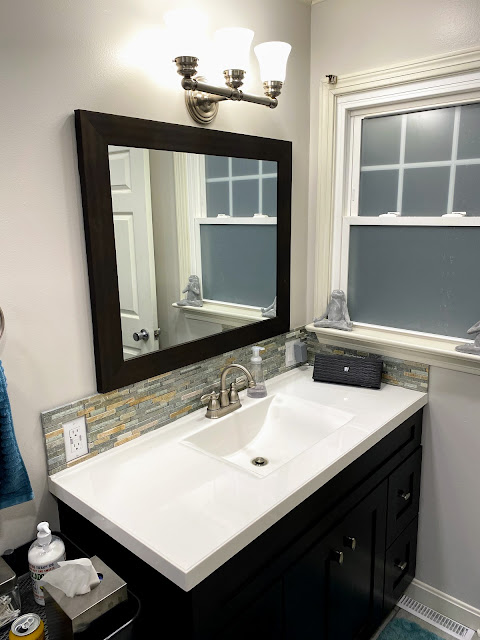 Once I turned my attention to the layout, a leak in the water feed tube for my furnace's humidifier diverted it briefly again. This had me taking out the removable layout sections around the furnace once more for humidifier repairs. Removing those sections multiple times in one year gave me my first layout project, reinforce the section ends and try to improve the sections so I one have to remove one not both. I'm wrapping up that work and should move on to adding my first mine spur this week. Stay tuned...

Posted by Chris Ellis at 9:05 PM No comments:

Email ThisBlogThis!Share to TwitterShare to FacebookShare to Pinterest
Labels: Module Construction, Other

On Saturday October 12th 2019, the Akron-Summit County Public Library hosted the Akron Mini Maker Faire at their downtown Akron location. For the second year in a row the Western Reserve Free-Mo had a display set up for the event.

Tim Moran was the sole supplier of modules for the show, highlighted by his Canton Ohio W&LE Freight House modules. These modules were are actually built to be both a part of his layout and modular to be brought to shows.

Brendan and I helped Tim set up, run trains and promote the hobby of model railroading to the crowds.

Hopefully I can finally supply a module of my own later this year.

Please enjoy a few photos of the event, click on the photos for a larger view.