Trying out Structures from Photos; The Dillonvale Mill

Last weekend fellow modeler Tim Moran showed me a building he made for his NKP Canton layout that was made from photos. For being just paper and card stock I thought the end result looked great. Lance Mindheim also made great use of this technique on his CSX Miami based "East Rail" and the "Los Angeles Junction Railway". I've always wanted to try my hand at making buildings from photos and realized I had a good opportunity in front of me to experiment on, even if only for a temporary structure.

As part of my idea to use structures to help downplay the "stairway tunnel" at Pine Valley Yard, I made a card stock mockup of the old Dillionvale Mill. The mill was notable for the large iconic "Mail Pouch Tobacco" advertising painted on it's westward face in my 1950's time period. This old concrete silo is certainly the tallest structure in Dillonvale and still stands today although now the Mail Pouch sign is almost completely faded away. I only have a few photos of railroad action in front of the silo and luckily the only one in color and from the front was taken during steam. If you have it see page 113 of the book "Nickel Plate Color Photography Volume 3 The Railfan Perspective".

From what I understand even in my 1950's modeling era the silo was unused. It was probably just too solid to bother tearing down. One difference form then and now is aerial photos from the 1958 show no garage attached to the front of the concrete silo unlike in present time. Since the structure still stands today I used Google Map's measurement tool to provide the length and width of the silo. Another Flickr.com photograph and some algebra provided the height measurement.

My final version of the concrete silo will have the painted Mail Pouch Tobacco ad but as I said in the beginning of this post I wanted to try out photoshopping pictures into something that can be laminated onto of foam core or card stock. I took the photo shown above and the other photo linked from flicker.com into Adobe Photoshop CS and worked the perspective out of the images, removed the garage and resized them to HO scale. Because this isn't the final 1950's version of the silo I printed the building sides on cardstock instead of the recommended matte photo paper. Then I used double sided tape to stick it to the card stock L-shaped form. 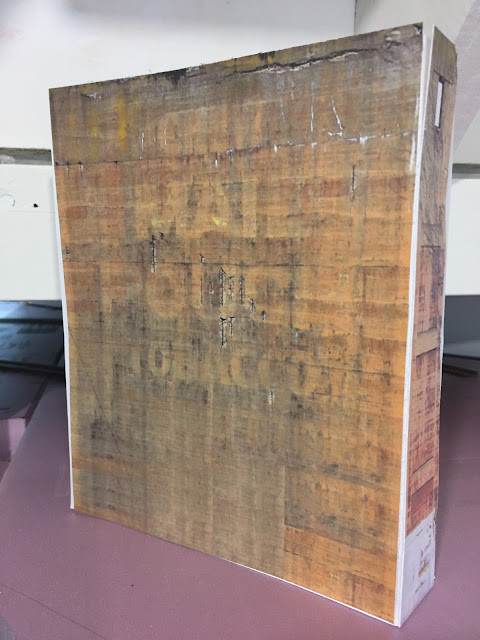 The side wall as it ended up a bit shorter than I anticipated but over all I'm pleased with the results. It helps to have great photos to use but when you're trying trying to recreate a world that existed 60 years ago that can be tough. I will still be able to use the 2007 version of the concrete silo in Photoshop as a guide to repaint the Mail Pouch ad, the lettering is almost all still there!

For fun I placed the silo where it would go to help draw the eye away from the stairway tunnel and double checked the scale with some equipment. 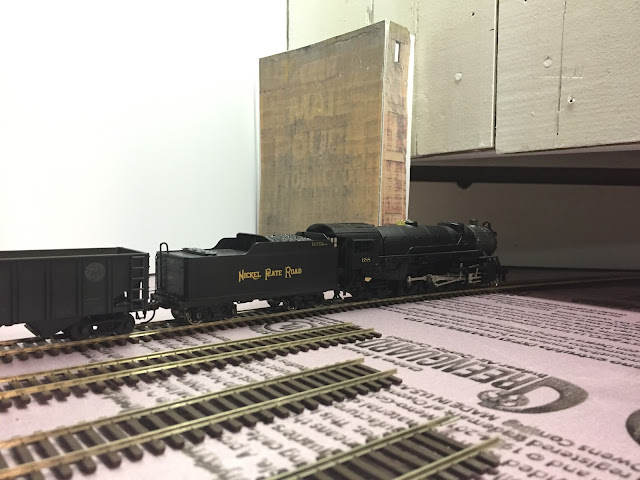 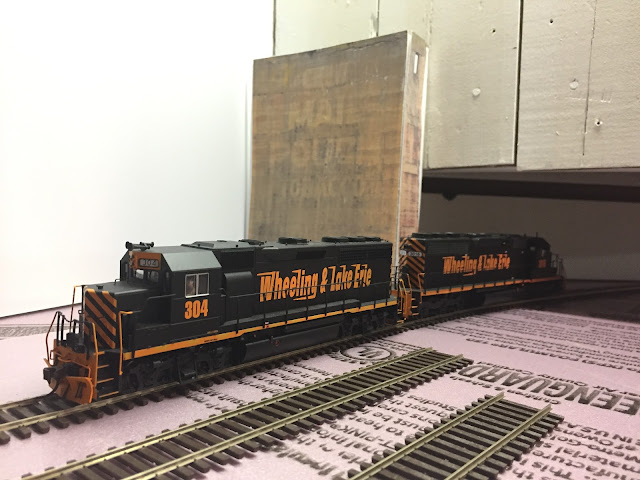 That matches the age of the silo better! It's been years since the Wheeling dropped off covered hoppers full of fracking sand at Dillonvale but this view is still possible. I think I prefer the steam view..

To hide the "stairway tunnel" I plan to use styrene sheet for the backdrop and above the opening painted my sky color in addition to lighting for the "tunnel" part. Ive seen good examples of how light beyond a hole in the wall really helps to hide the fact its a dark hole in the wall. All that plus the structures like the old Mail Pouch Tobacco concrete silo should lessen the visual impact.
Posted by Chris Ellis at 8:20 PM