Now with Pine Valley Yard at a proper height and the west end fitting together nicely in planning, I could move to mocking up the eastern end where the engine terminal is located.

Dillonvale's Pine Valley Yard was the home base to all the mine runs in the area and therefore needed engine facilities to support those operations. By the mid 1950's many of the yard's structures had been updated and gave the servicing area a more modern look.
Everything on that list is pretty doable for the layout except the coal tipple. The W&LE liked to build massively long coal tipples for their yards that to me resemble a wooden roller coaster with a small barn on top. A cable would pull a coal hopper up the ramp and dump it's contents into the holding bins at the top. These are very distinctive structures and look like a good challenge to scratch build, but they also would unfortunately hog up a lot of layout space. I wish the Wheeling would've built a coal tipple here like the one they had at Jewett, which is a dead ringer for the Walthers wooden coal tipple kit. Here's the Pine Valley coal tipple.

I've always had a hard time compressing and cutting things out of my plans. I just want to stick to the prototype as close as possible, but I might have to draw the line at this coal tipple. Everything else looks like it could translate well into a model version. Here's the prototype.

Instead of braving the cold wind and snow and getting another piece of foam from the garage, I just used the basement floor, along with some flex track and paper switches to throw a quick mock up together.

It could be compressed a bit here and there, and yeah I did throw in the "roller coaster" coal tipple just to see... The roundhouse sadly didn't make the cut, as it would encroach to far into the aisle and isn't completely necessary with plenty of other track space for engines. A Walthers 90' turntable will be adequate for turning the W&LE/NKP I-3 2-6-6-2 engines with the smaller Mikado tenders.
Overall I'm happy to say that it looks like the engine terminal can work in the 10' of space allotted and look pretty close to the prototype.

Earlier my friend Tim Moran had stopped by to share some ideas and help me plan the Adena Railroad with his track planning software. As a big surprise he brought over a decommissioned Free-Mo module for my son Brendan to play with while layout construction slowly starts. 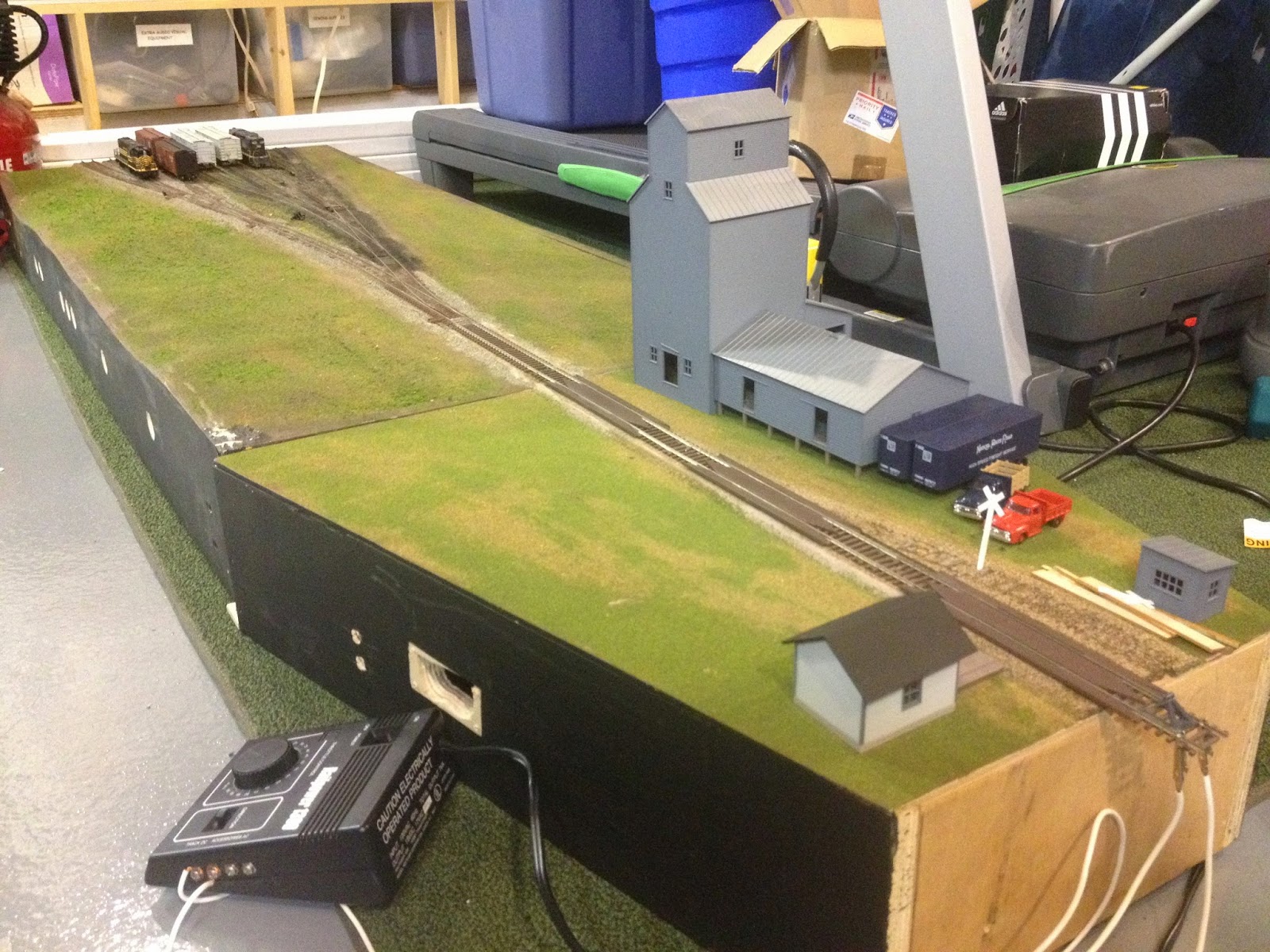 Brendan quickly decorated it with some of his buildings and cars and happily switched it the rest of the evening! Thanks Tim!

Tim is a fellow Nickel Plate Road modeler with a focus in modeling a small section of Canton, Ohio. He is also involved with the Western Reserve Free-Mo group here in Northeast Ohio. The group joined up with other Free-Mo groups for a large display at the 2014 NMRA Convention in Cleveland this past summer that was a blast to see.

If you don't know what Free-Mo is check it out at  http://www.free-mo.org/about