Most home work or repairs that I do, something unexpected typically pops up to ruin the "This will be easy!" enthusiasm for my project. This was the case with tearing out the old basement shelving.

When I was vacuuming the cobwebs off the wall to prepare it for painting, I knocked off a big chunk of something coating the top of the foundation wall. As it turns out a skim coat was literally falling off the brick, like old wallpaper bubbling off a wall. The bricks in some places were covered by root webs that had penetrated the mortar from a long removed bush that had been planted too close to the house. The moisture and roots were crumbling the mortar in a few places. 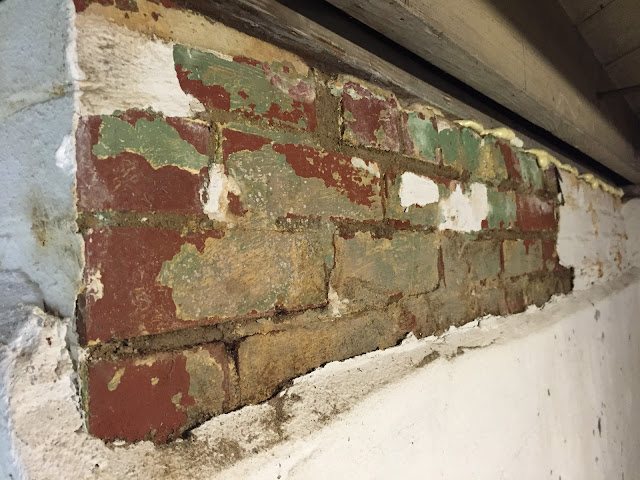 As you can see I've removed half of it with a paint scraper and very little effort. That's how bad it was. Just when I felt like I had some real momentum in getting this layout started...
I was literally one step away from painting the floor and wall and moving on to building the new shelves.

I don't know how long this will take to fix, but at this point I'm going to do it right and not hurry a repair.
Posted by Chris Ellis at 11:10 PM