A recent discussion on the Nickel Plate Road Modelers Yahoo Group, lead me to compare and contrast my small collection of W&LE hoppers to their prototype counterparts.

In my modeling time frame of 1953-54, I always assumed there would be some W&LE equipment that had yet to be repainted with new Nickel Plate Road lettering. A recent look at data contained in the January 1954 Official Railway Equipment Register, confirmed that plenty of Wheeling lettered freight cars still roamed the rails in two different classes of open top hoppers.

The Wheeling & Lake Erie name is very uncommon for any model releases in any scale, and in addition decals for freight cars are also hard to find (edit: there is a old Campbell Road dry transfer sheet, Set WT-31 for the WLE type hopper lettering and a W&LE Boxcar Decal set from Wabash Custom Decals). Luckily there have been some choices lately in ready-to-run HO scale models that make adding some W&LE flavor to your hopper roster easier.

I'll cover the two classes of W&LE hopper that populated the NKP car roster, and the HO scale models that represent them. All of these models are lettered for the W&LE, but with the exception of two, they are special limited runs and are no longer available.

I won't get too nit-picky covering these models unless warranted. I don't really get into super detailing freight cars or get too bothered by a missing inch here or there dimensionally. I need a fleet of 200-300 hard working hoppers to model the coal hauling part of the Nickel Plate. If it comes with brake piping fine, but adding that stuff or worrying about a missing row of rivets isn't on my to do list.

This is the Athearn 34' 2-bay 50 Ton Offset Hopper model. The Athearn hopper is showing its age now with newer and better looking versions produced by other manufacturers. It's still a good model and cheap, great for trying to build a very large fleet of nondescript hoppers.

I found this model on eBay and it's Athearn box was labeled as a NMRA Cleveland Division 1 special run, from when I have no idea. The lettering is a little rough but this is a good example to show the different lettering styles the W&LE used.

The photo of the prototype car W&LE #61147 above, shows the "as delivered" lettering style which was stretched out using an ampersand and abbreviation periods after each letter. At some time before the NKP lease of the Wheeling in December of 1949, the periods and ampersand were dropped in favor of a more simplified "W L E". I don't know when this changed, but I'm sure noted W&LE historian John B. Corns might. I'd love to see proof of the older lettering on a hopper appearing in the 1950's, that would save some decal work to change the older hoppers.


The Atlas 34' 2-bay 50 Ton Offset Hopper was announced in Feburary 2012 and released sometime in 2013. This was the first time Atlas offered these in W&LE lettering. They came with the "as delivered" 1930's lettering and in two different numbers,  #61071 and #61147.
The Atlas model offer a closer look to the prototype with crisper detail and comes with a plain coal load, Kadee compatible couplers and a real plus, metal wheels. The Atlas also matches the lettering style the best, but just a touch thick.

I have four of these and hope to get a few more as they are nicer looking than the Athearn and easier to find for now. I'd like to update the lettering to the 1940's standard on these hoppers.

As the song goes, if I had a million dollars, I'd buy a whole fleet of the these hoppers! The Intermountain 34' 2-Bay 50 Ton Offset Hopper is the cat's meow of the small offset hopper models we've looked at so far. All the nit-picky details, rib notch spacing at the top, rivets and more, look just like the prototype photo. Even the inside looks awesome. The only flaw I could think to point out is the lack of a trust plate in the upper left corner, but now that's getting picky. Did I mention it comes with metal wheels and Kadee #158 scale whisker couplers? These are available in that 1930's lettering and 6 different numbers; #61147, 61164, 61235, 61259, 61370, 61428.

Unfortunately these retail for $38.95, not real economical for building part of a hopper fleet with these bad boys. But if you only need a few, then you can't go wrong investing in these. Every now and then you can snag one (and only one for me) for $25 on eBay like I did.


Also worth mentioning is a future release from Accurail of their 7700 Series Offset Side Twin Hopper. Who knows when it will get made, or what lettering style will be used, but at least its on the schedule and will get released someday. These cars would be also be an economical option to build a fleet with and Accurail makes it easy by offering decal renumber sheets matched to the particular roadname.

I always felt like the Accurail twin hopper seemed a little petite standing next to any of the other three mentioned above. One day I'll have to take a scale ruler to one and compare it to the NKP Freight Diagram sheets and see. 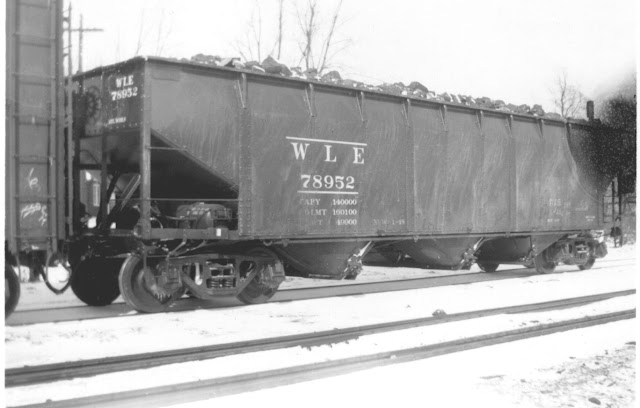 
The old Model Die Casting 3-Bay offset hopper has been around forever. I have no idea what real life example this hopper was based on, if one really existed at all. The ends of each side where the angled offset bulge is supposed to begin, is completely wrong among other things. The more accurate Stewart/Bowser and Accurail cars has rendered this MDC hopper version obsolete. Athearn now owns the MDC/Roundhouse line, is still occasionally making this car for sale. Most recently it was announced as a future release in NKP lettering as this ex-W&LE class of hopper.

I hate to be so critical of a car model, but this one needs to be retired just like the old Athearn wide body diesel engines. So why do I have it? I believe I got it on eBay at the same time as the weathered W&LE Athearn 2-bay hopper above. I think I threw a lowball first bid on it for the novelty of it being lettered W&LE,  thinking I would probably get outbid at the last second anyways, oops...

While this car doesn't show up in the NKPHTS's All-Time NKP Model List. I found one on eBay with an original box. Apparently this was a Roundhouse release, as kit #7784 with my models W&LE number of 78958.

The weathering job hides it's ugly lines decently enough, so I'll keep it as an example to show why it shouldn't be in your W&LE/NKP hopper fleet when there are way better looking alternatives.


This is the Stewart (now Bowser) 3-Bay 70 Ton Offset-Side Hopper. These are really nice models, easy and quick to assemble and can be found cheaply enough to use for building a large hopper fleet.
Unlike the MDC car, the offset hopper sides are just like the prototype and the rest of the basic details match up as well. Of the three cars this has the best rivet detail.

I found two of these in W&LE lettering at a train show in Cleveland and quickly snatched them up. Only later I noticed the data lettering is the wrong font, but they came with Kadees, metal wheels and coal loads so I couldn't pass them up at $10 each. The Athearn box they came in said Greenway Products, and a Google search found a old message from 2001 on the NKP Yahoo Group mentioning they had these for sale back then.

I have about 40 of the Stewart/Bowser in various road names (mostly NKP) and they make a great base to any NKP era hopper fleet.


The Accurail 3-Bay 70 Ton Offset-Side Hopper is very similar to the Stewart/Bowser model. Both match the prototype well, but the Accurail has finer details, better looking brake gear and thinner grab irons and stirrups. The assembly of your first one can be a bit tricky to fit together, especially the fitting of the bolster assembly into the ends of the car. But like most difficult things, after doing a few I can now build one in about 20 minutes.

The NMRA Cincinnati Division 7 offered these W&LE Accurail offset 70 ton 3-bay hoppers back in 2007. These were lettered as delivered in the 1940's lettering and available in four numbers; 78952, 79240, 79897 and 80829. Now they are long sold out, but I found a few of these on eBay awhile back. The Cincinnati Division 7 always has good car projects to offer modelers. Lately they have featured cars from Tony Koester's Allegheny Midland and Allen McClelland's Virginian & Ohio.

Accurail's webpage for their 7500 Series 70-Ton Offset-Side Triple Hopper doesn't list the W&LE as a possible future release, probably because of the Cinci Division 7 release. Accurail did have a past release of the NKP lettered version of this hopper.

Option One for quickly including some W&LE hoppers in a NKP hopper fleet would be to just to buy the Atlas or Intermountain 2-bay models, not worry about how long certain lettering styles lasted and call it a day. If those are too pricey or become difficult to find, then waiting till Accurail releases their 2-bay becomes a back up plan.

Option Two, which I'm using for now to boost the W&LE presence in my roster is the above option plus scouring online sites and train shows for the special runs.

Option Three is decaling your own hoppers with;
Aside from a lucky train show score, decals are the only was to get 3-bay W&LE hoppers right now.

If I had to standardize on one 2-bay and 3-bay model for a large fleet, I would probably just have Accurail make me a custom run of everything I would hope to need. This would be the way to go if you were modeling the W&LE in the late 1940's.

My plan for now is to standardize on just the Atlas 2-bays with Accurail and Stewart/Bowser for the 3-bay hoppers.
Posted by Chris Ellis at 5:00 PM