Last Saturday's Model Railroad setup at the Akron Mini Maker Faire was a lot of fun and seemed to be well received by the Library and the attending crowd.

I wanted to bring model railroading to the Maker Faire because model railroading is such a multifaceted hobby that encompasses electronics, art/painting, woodworking and engineering. I also felt the Maker Fair was a place to show the hobby to an audience that was not expecting to see our display unlike going to a train and toy show.

Our display was unusual in that it was the first Ohio marriage of Free-Mo and Sipping & Switching Society module standards.  Matt Robins from the S&SS bought his branch line modules which made up about 65% of the display and the Free-Mo modules from Tim Moran and Wayne Buran made up the remainder. Our setup was about 60 feet long with a point to point track plan.

Being this was my first "show" where I was a part of a display I quickly found out its kinda like hosting a party. Nine hours later I can say it all was a blur and was over before I knew it.

In all Brendan and I had a great time and thanks again to Tim, Wayne and Matt for bringing their modules and to the Akron-Summit County Public Library's TechCenter staff for hosting the Mini Maker Faire.

Below are a few of the photos that I remembered to take. 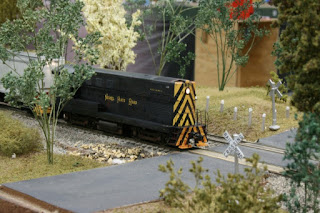 This Saturday September 22, 2018 come see a HO scale modular layout presented by the Western Reserve Free-Mo in downtown Akron, OH. My son and I will be there helping to expose the hobby of Model Railroading to a new audience.

Come see us by the Children's Room on the 2nd floor!

As a bonus the Nickel Plate Road #765 will be running on the CVSR a short drive away in the Cuyahoga Valley National Park.
Posted by Chris Ellis at 1:31 PM 1 comment:

No, twenty five years later is not how long it's been since my last post but it has been almost a year since I posted anything of substance. Hang on for an explanation of the blog post title later. I do apologize for the lack of layout postings and I appreciate the concern that some of my regular readers had for my blog disappearance.

A lot has happened since last my last non-Wordless Wednesday post both good and sad. Last year in the fall I took a new position at an organization I had previously interned with while finishing up my degree. I could easily say it's my dream job and feel very fortunate to return to the public sector and where I first started the path to my new career.

After a few months of settling in at my new job, I had hoped to turn my attention back to the layout but a complete bathroom gut and remodel took priority. Even as I write the bathroom still commands my attention but I can finally see light at the end of that tunnel.

As for the sad, after a long illness we made the hard decision to let our cat WahWah find peace in late November. He was a very vocal companion that thankfully never showed interest in the layout as a playground and will be sorely missed after 17 years in our lives.

Earlier this year my wife and I also faced the first loss of a parent together when her Father lost a long battle with brain cancer.  When growing up at some point you realize the possibility of loosing a parent but it always seem like something so very far away. It definitely puts a certain perception on life and where you are at in life it when it finally happens, whether it's you or to someone very close to you.

After this personal update now lets get back to trains. I found once you get removed from your hobby for a while it can be difficult to find where to dip your toe back in, especially if you're in the midst of building a layout. The best place I thought to start was to clean my workbench up.

This in turn spurred me to complete a few projects that had been lingering for a long time, such as the PRR hoppers I picked up for cheap on eBay awhile back. I also put together a large number of Accurail W&LE hoppers that had been piling up.

The "25 Years Later" name of this blog post comes from not my absence but the time it took me to complete an old Walther's kit.

While organizing my pile of "to build" kits when cleaning, I dug out a modern day Walthers tank car I bought as a teenage N&W/Norfolk Southern modeler. On inspection it looked like I had started construction but probably gave up frustrated with either the handrails or ladder based on the glue marks. Back then with a limited budget I didn't quite have the tools I do now, so with the right size drills to ream out better holes and some CA kicker I finished the build only 25 years later!

While it has no place in my NKP steam era collection, it will fit in nicely with Brendan's modern day equipment.

It's crazy to think of my teenage self unknowing beginning to build the car not for myself but for my future son!

I hope to share some of the other little things I've accomplished model railroading-wise over the past year. Thanks for hanging in there.