A few days ago my first published article, "Choices: Wheeling & Lake Erie Offset Hoppers in HO Scale", was released in the September issue of the Nickel Plate Road Modeler's Notebook! It’s pretty much a slightly expanded version of my blog post on the same subject with more data, prototype photos and new pictures of the hopper models. The improved model photos were taken on my new scenery test module, which was one of the driving reasons for building it. 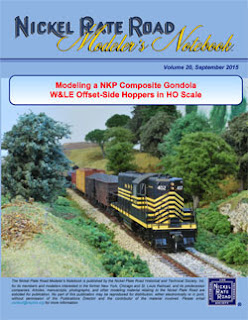 The September and other issues are available here but only members of the NKPHTS can access that page and download the PDF file from the website. There's hope that will change in the future to match the practices of other Historical Societies making their modeling publications available for free online.

I won't deny it's quite a thrill to see your name on an article you wrote in a publication, be it online or in print. The Modeler's Notebook Editor Ray Breyer is always looking for more content for the Notebook. So if you have any NKP or W&LE related modeling that you want to write about, drop him a line at modeler@nkphts.org

If you haven't done so lately or at all, check out the Modeler's Corner at the NKPHTS.org website for the latest NKP model releases, a tiny preview of the Modeler's Notebook for non-members and the very informative All-Time, All-Scale NKP Models List.

Thanks again to Ray for contacting me about making my blog post into an article for the magazine and for all the work that he and others have done with the Modeler's Notebook.

Email ThisBlogThis!Share to TwitterShare to FacebookShare to Pinterest
Labels: Modeling

The Harbringer of Fall

I consider myself very fortunate that I not only live near the Cuyahoga Valley Scenic Railroad but that they have hosted the Fort Wayne Historical Society's steam engine, the Nickel Plate Road Berkshire #765, every year except once since 2010.

Just about every September/October I get treated to the sights and sounds of steam and smoke from a real surviving steam engine of my favorite railroad.  Typically during the 765's stay in "The Valley" the season starts to shift, signaled by those bright cloudless sky blue days and the occasional cool misty rains that make you dig up that warm hoodie you haven't worn since spring.

The 765's arrival in Akron today invoked that feeling of Fall for me with those sounds and smells, and also that strong afternoon sun which accompanies the march toward autumn. Brendan and I have always tried to be there when it arrives and today was no different.

I believe there are still seats available for the next three weekends of trips starting September 19th. If you live in the area come and ride or just come to watch!

Email ThisBlogThis!Share to TwitterShare to FacebookShare to Pinterest
Labels: Other, Railfanning, Steam Engines

Posted by Chris Ellis at 1:19 PM No comments:

The Adena Railroad branchline stretched twenty and a half miles from Adena to Neffs near Bellaire, Ohio. Over that distance the Adena Branch packed in some remarkable features including two tunnels, one being the longest on the W&LE system, and thirty six bridges. Three of those bridges were some of the most impressive spans on the entire Wheeling system. They are the Maynard Bridge at MP 10.01, the Jug Run Bridge at MP 10.91 and the Route 9 Bridge at MP 12.68.

The three big bridges were all in a row within three miles of each other as the railroad snaked from the valley of Cox Run and Wheeling Creek to the Jug Run valley. I hope to model all three or at least two of them in some form.

In order to get a better feel for how these bridges would fit in the layout space and at what scale could they be built at I decided some mock ups needed to be made.

Last year I discovered Belmont County's excellent GIS department had scanned and uploaded the W&LE's Valuation maps along with other area railroads within the county borders. They also have some excellent aerial photography for their county, between these sources I naturally felt like I'd hit the mother lode of historical data.

Using the PDF valuation maps and Adobe Photoshop I was able to cut out the section of map I needed.

I rotated it and cropped it further to achieve something that can be printed reasonably without consuming a ton of ink or paper.

From the Adobe Reader software, I printed the bridge map on "poster mode" at 100% to get a test print. Taking a HO scale ruler I measured a part of the bridge, the 153' Through Truss Bridge, and found it to be only 93' long. Luckily my recent College Math classes helped with an equation to find the proper scale to print at.

The printed 153' long truss bridge section was perfect against the ruler and quickly became a live lesson to my son as to how math is important beyond the classroom.

Here's two of the bridges printed out to HO scale, the Maynard Bridge at top and the bottom one is the third big bridge, the 336 foot long Route 9 Bridge near St. Clairsville (now part of the National Road Bikeway and nicely restored, Google Maps link here). Again I'm not sure the real name for this bridge, so if you know please drop me a comment.

As much as I would love to make each of these to scale, they are pretty big. The Maynard Bridge if made to exact scale in HO would be almost six feet long! Some amount of compression will be needed when these get modeled.

For now I have some scrap 1/2" pink foam I'll mount these paper bridges to so I can move them around my basement and get a feel for how big is too big.

I gave the static grass areas a quick vacuum which naturally neatened up their appearance.  Here I flipped the module around so the front would be against the background to show the grass better from a lower viewing angle.

And here was a top view from the typical orientation of the module.

It's surprising how much color difference there is between the two shots. Both were taken under the same light source, but the lower angle shot possibly had my hand and phone shadowing the scene a bit. I'd say the real color is somewhere between.  And for anyone curious all the photos taken in the last few months were captured with a iPhone 6.

I also got out some Bragdon weathering powders and rubbed some dark rust along the front set of rails using a small microbrush. This really helped make the joint bars visible like I questioned in Part 2 of this module project. I'm a little more enamored by the joint bars now and would like to try out the ones from Precision Design Co. to help make a final decision on how best to use them in the future.

Today I also stopped by the local Pet Supplies Plus and found they no longer carried the aquarium substrate I used for the cinder/coal ballast in this project. The bag I bought on clearance must've been the last one they had. I know I've seen similar stuff at Petsmart, so I'll investigate their supply. I also have a local specialty fish and aquarium supply shop nearby I should check out as well.

I just hope at either place I don't have to explain why I need a specific texture...

And lastly I wanted to share while investigating static grass techniques I stumbled upon the work of Martin Welburg. His work with static grasses to build very fine looking trees, bushes and weedy fields is completely out of this world.

Here's a link to a 21 page thread where he shows tons of photos of his work and how he did it.

It's totally worth looking at all 21 pages if you use or plan to use static grasses.


Quick links to the rest of this Series

On Saturday my friend and fellow Nickel Plate Road modeler Tim Moran came over with his homemade static grass applicator and some grasses to try out on my scenery test module.

The applicator was built from a small PVC pipe as the handle with the electronics stuffed inside and a recycled food container with a screen built into the lid for distributing the static grass. If you search on Google there are many how-to videos and guides for building your own.

Because I didn't take a good photo of Tim's applicator here's a good example of one, the popular factory built model by Noch. A lot of people build their own because it seems pretty simple to do and also store bought applicators tend to be pretty pricey, the Noch GRASmaster pictured retails for around $190.


For those that may not know about this scenery method, the static grass applicator applies a static charge to the rayon or polyester "grass" fibers as it passes through the screen. The fibers then fall vertically onto a surface coated with glue which is grounded to the static grass applicator by a wire usually clipped to a pin or nail stuck in the glue. The end result looks like grass!

We started with a small area so Tim could show Brendan and I how it worked. We mixed some Silfor 6mm late summer, early summer? and a brown grass together, brushed some glue on the module and went to work. One tip Tim had was mixing a few drops of water to the white glue to help it be a better conductor.

Gently shaking or tapping the applicator about 1 to 2 inches above the surface of the glue distributed the grass fibers and soon a little grassy patch appeared. After the glue dried any grass that missed the glue would be vacuumed up for reuse.

Brendan and I both took a turn extending the grass patch down the edge of the module. It was pretty easy and enjoyable with results you can instantly appreciate. Tim explained a few other techniques you can use like stacking the grass fibers or adding some ground foam on top make it look like more than a mound of grass. We also talked about the scenery and grass work of Jason Klocke which in my opinion is always worth talking about and is just incredible looking.

If you want to see some great scenery by Jason and others just just search the Yahoo Proto-Layout Group's Photo section and if you're not a member yet, this thread on Model-Railroad-Hobbyist has a couple photos he's shared of his work.

Anyways here's the humble results of my first experimentation with scenic grass.

At this point the glue was still drying so I hadn't vacuumed up the loose scattered bits yet, but this simple start still makes me smile when I look at it.

Since Tim needed to order another Ion Generator for one of his grass applicators, I piggybacked on his order for one so I can build my own.

For the time being this will be it on building my scenery test module. I'd like to build my own grass applicator and use it on the rest of the module for future updates.

Thanks for following along this far!