Over on the Atlas Rescue Forums a member says he spoke with Athearn representatives while attending the Milwaukee Train Show.  He reports that Athearn does plan on doing the N&W green patched units in a future production run.

So if this is true, it just becomes a question for N&W modelers of "how bad do you want them?".  Wait for October/November" 2016 buy the IT units and patch them yourself (not too difficult of a project), or wait until 2017 and beyond for when Athearn feels like doing a 2nd run of the SD-39 (probably also for the Santa Fe modelers dying for the "Blue Bonnet" paint scheme) and not lift a finger for a true RTR model of these green units.

I personally think turning a couple of the IT units into the faded and patched version would make for an interesting project.  We'll see where my interests or needs lie a year from now, I am modeling the 1950's after all and that "should" be my first priority.

On a side note another Atlas Rescue member who is also excited for this release, said he actually photographed the green SD-39's when they ran around Dillonvale.  He also called them the "Green Weenies". What!?  Not a nickname I would've expected at all!
Posted by Chris Ellis at 7:12 PM No comments:

A while back in the post "Shadows of the Past" I wrote about the neat green Illinois Terminal SD-39 engines the N&W received when they purchased that railroad. In the early 80's these hastily relettered green engines prowled the eastern end of the old ex-Wheeling valley lines. They hauled coal out the Adena and AC&NA branches, worked the mills along the Ohio River and moved other freight to and from Brewster. The unique green N&W engines among a roster of all black diesels seemed to draw many railfans down into SE Ohio to photograph them in action.

So naturally in my research of the Adena Railroad these green engines show up in many pictures around Adena, Dillonvale and along the Ohio River. They even appear in two out of the only four "in action" photos I have of my favorite bridge in that area, the Jug Run bridge on the Adena branch.

So because of all that I've grown pretty fond of them and always felt if the SD-39 was ever made in HO scale and offered in the green Illinois Terminal paint, I would probably have get a couple.

Well today Athearn announced a new model in their Ready to Run line, the SD-39, and they also offered it lettered for the Illinois Terminal! 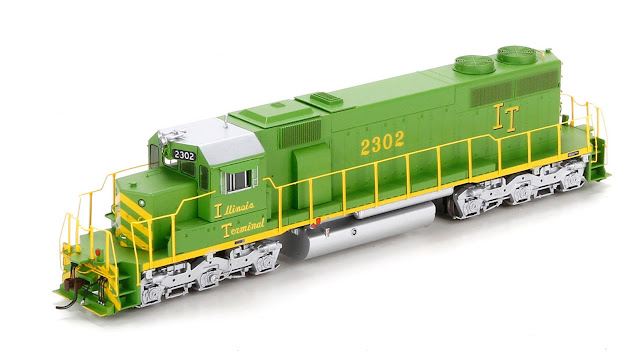 Athearn is also doing these as repainted into N&W black with the full name spelled out on the sides. They look pretty nifty too, but the oddity of green N&W units is the attraction for me and all those who wandered down into SE Ohio to photograph those engines many years ago.

I think a couple of these patched with N&W lettering and heavily weathered would go great with my other N&W engines! With these supposedly due in late October 2016, I'll have plenty of time to save some pennies.

I knew when I decided to model the coal hauling part of the NKP's Wheeling District, I would need a substantial amount of hoppers to achieve that goal.  My estimate for modeling the flow of empties and loads in and out of the Adena and AC&NA branches is about 250 to 300 hoppers for an operating session.

After attending a train show this past Sunday in Dalton, Ohio, I am finally at the low end of that goal thanks to this stunning find. 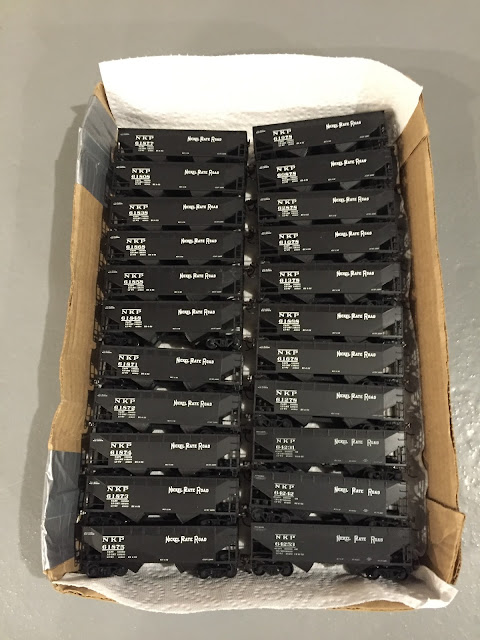 Twenty two Athearn 2 bay offset hoppers, all with unique numbers and Kadee compatible plastic couplers!  The vendor had much more good stuff beyond these NKP hoppers and it took a lot of financial restraint to leave that table with only those cars.

In my W&LE hopper post, I said I was looking to shift to standardizing on Atlas 2 bay offset hoppers.  Well... I couldn't pass up these Athearns, especially at the nice bulk price deal I was offered.
They will help balance the ratio of my NKP lettered 2 bay and 3 bay offset type hoppers. I had way too many of the 3 bay offset type since the Stewart model in NKP 6 packs has typically been the easiest to find and purchase.

The renumber job on my hopper jackpot was done nicely with decals (saving me a ton of time) and sealed with dullcote, which means they are ready for weathering.  All but 3 of the cars have the small "NYC&StL W&LE lessor" lettering which is often left off and is an important detail to me. The reweight date is a past my 1953-55 time frame but that can be fixed later with decals.  I typically use Kadee #158 whisker couplers, but the included copycat couplers at least have the metal knuckle springs which will do for now.  All my hoppers are slowly being upgraded to metal wheels for their better rolling qualities and cleanliness compared to plastic wheels.  Doing this however is an expensive undertaking, for example this whole lot would almost consume $70 worth of Intermountain metal wheels.  These hoppers only make that line waiting for metal wheels longer, but all in good time.

With these cars I can finally lower the level on my hopper acquisition radar!
Posted by Chris Ellis at 12:00 AM 2 comments:

Posted by Chris Ellis at 4:23 PM No comments:

A couple of Sundays ago fellow Nickel Plate Road modeler John Albaneeze invited Brendan and I over for a group work session building loads for our hoppers and gondolas. We were also joined by Tim Moran and Jerry Jordak who's Penn Central layout I got to operate on with Tim earlier this year.

I brought along a bunch of plastic hopper load inserts by Accurail (I really recommend them) that needed finishing, a bottle of Scenic Express mine run coal, the Dollar Tree black decorative sand I also use as coal and few other supplies not knowing what to expect. I've been to John's house a few times and he's always been the ultimate host, so I should've known he'd be well prepared for us.

There were tables to work on and a table full of supplies, containers full of different grades of sand, real coal, metal shavings, rust and all the glue and paint we might need. There was even a table with donuts and coffee which helped pass the time waiting for everyone to arrive. Once Tim and Jerry arrived we got to work. Tim brought several grades of Smith & Sons coal and gravel and added it along with my coal to the communal material supplies.

Here's a view of my set up on the work table I shared with John.

While I dug into coating the tops of the Accurail loads with different sizes of coal, John showed Brendan how to craft a sand load for a gondola using a core of insulating foam.

I believe Tim came up with the trick we all started using of mixing a bit of Mod Podge glue with a color of acrylic paint similar to the load material we were using. This was helpful for concealing the color of the foam and adhesion of the load material. Even though Mod Podge dries clear, I used the glue and back paint mix to better hide any spots I might miss with coal on the plastic loads. Making my coal loads was a simple process of painting the load top with the glue/paint mix and then pouring the coal on top. After about a half hour I shook the loose coal off for reuse and set the load aside for further drying. Pretty simple stuff.

After Brendan built two sand loads, his attention wandered to the connecting room where John's Carrollton Branch layout resides.  Brendan and I had the opportunity to run one of the local trains in a operating session there a couple of months ago, so Brenadan was hungry for some more switching fun on John's layout.

After a while we broke for a great lunch of sloppy joe's then continued our load building work. I had more loads than I realized piling up around me, but Tim came to the rescue and helped stack the driest loads to make room for more as I worked. Jerry made a whole bunch of gravel loads for his cement plant and some loads that may work for a coke train.

While we might have been working on our own load projects, we all had a great time working together and talkin' trains.

Once Brendan and I returned home and I unpacked my new loads to spread out to dry completely. It was only then did I realize I had completed 42 new loads for my coal hoppers and gondolas!

I believe John said the rust flakes came off his old Ford Mustang. Where ever they came from they'll look pretty good as a load headed to the steel mills at Mingo Junction.

Thanks again to John for having Brendan and I over. We look forward to any future activities!

Posted by Chris Ellis at 9:22 PM No comments: