So it's been about two weeks since a real post. What have I been up too? A lot! Go grab a coffee or snack because this is a pretty big construction report.

Here's a quick look at where the layout is at now.


So here's a run down on the new construction.

I occasionally noticed a few of the stamped metal shelf brackets, notably the smaller 8"x10" and under sizes, seemed to have a severe upward tilt.

Nothing a little shim can't fix. Luckily I didn't run into this too often and this section of the layout won't be using many of the small brackets.

The next project on the list was to tackle the open ceiling. I know from experience having the old mocked up versions of Pine Valley Yard sitting in my basement for months at a time, a fine dust and grit seemed to rain down from the floor above. To keep the layout as dust free as possible something had to be done. I'd been kicking around the idea of using a low profile ceiling tile system but that kind of expense at the moment vetoes that idea.

A visit a couple years ago to Mike Mathie's Canton, Ohio Nickel Plate Road layout provided the idea I would need to solve the ceiling issue. I recall his ceiling looked like he had simply screwed whiteboard into the floor joists. Being distracted by his impressive layout I never got the chance to ask about the ceiling, but I filed away what I thought I saw for potential future use.

The first ceiling area I wanted to do is where the large space eating Adena wye will sit. Now would be the time to get this done before further construction made this area impossible to work above. 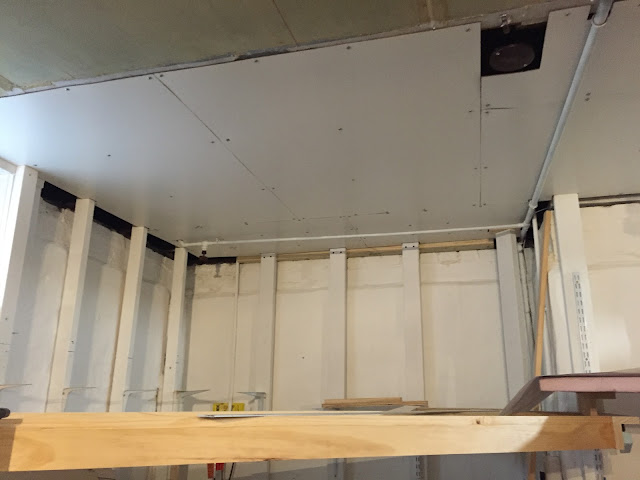 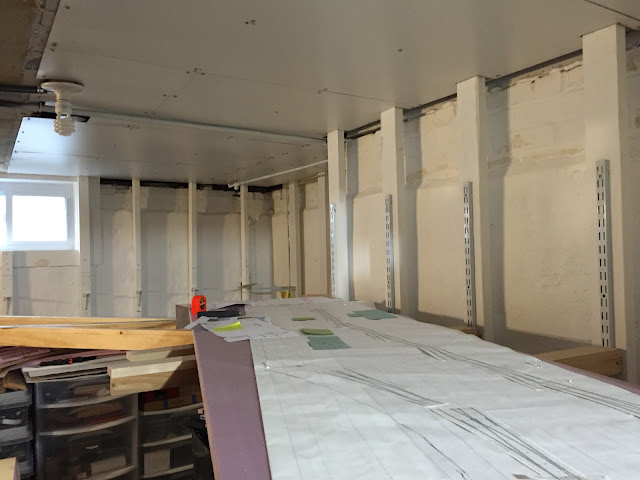 Twenty five dollars got me two 4x8 sheets of white hardboard and a box of lathe screws to experiment with this method for a cheap ceiling. The hardest part was accurately notching the panels for the wall studs and fitting things around the main water pipe hanging from the joists.  I also painted the water pipe white to help it disappear. Notching the panels around the studs will help give the hardboard backdrop a nice fluid meeting point to the ceiling as not all the studs are perfectly in line with each other. I plan on going back and using white paint on the screw heads and touching up some of the white panel pieces that are showing their brown edges.

Is it perfect? No, but if you're looking at my ceiling then I'm not doing a good job with the layout or operations. Yes, there is the possibility that over time a few panels could sag a bit, but for now I'd call this a success and will use this method over other parts of the layout as I continue.

I went with a common material that many layout builders use for their backdrops, 1/8" 4x8 sheets of Masonite board. At Home Depot this is called Eucaboard and runs about $7.99 a sheet. It can bend to a pretty tight radius and I knew I could use it for my three inside corner curves. However I had two other wall corners that would have a severe outside radius, and for that I visited my local plastics supplier for a sheet of polystyrene plastic. Piedmont Plastics was happy to sell me a 4x8 sheet of .040" thick styrene for about twenty five dollars. Considering what I pay for tiny sheets of styrene at a hobby shop I thought that was a great deal. Plus what I didn't use for the backdrop would give me enough material for years of structure scratch building.

All the screw holes were countersunk, except the bottom ones as they will be covered up by the foam base. Helpful tip, don't touch the countersink bit after doing 20+ holes in a row. It gets a little warm...

Next I cut out sections of styrene for the two outside corners and Loctite Power Grab adhesive was used to attach the plastic to one side of the hardboard backdrop.

I applied the glue with a caulking gun then spread it evenly but thick around the contact area with a putty knife.

Then I pressed the styrene sheet into the glue and smoothed it flat with a rolling pin (covered with saran wrap!). The Loctite Power Grab performed very well, better than I had hoped. Just to be safe I let each panel dry for a couple hours before attempting the bend to the other side.

All went well until the bend shown in the photos above and below. I failed to make that panel long enough which put the stress of the bend too close to the gluing area. In order to help the panel stick I had to screw a wood brace into the plastic panel and the hardboard below.

In retrospect I should've added another 3-4 inches in length to the above corner panel. I didn't have this problem on the other styrene curve in the below photo.

After the hardboard and plastic backdrop was firmly attached, I used joint compound to fill all the screw holes and taped and smoothed any seams. All this work and hiding the styrene edge by feathering out joint compound brought back memories of a winter spent working on a drywall mudding crew. Thankfully those are just memories now, it was one of the only jobs I really struggled with learning the techniques. Who knew it would help me build a layout twenty some years later! After the backdrop was dry the next day I sanded the patched areas smooth. I wisely covered everything I could in the basement as even with running a shop vac under the sanding area, dust still managed to get everywhere.

The color one chooses as their blue sky can be very subjective depending on time of day (obviously) the season, weather or even geographic location. I found plenty of discussion on this topic in this thread on the Model Railroad Hobbyist forums.

One of the blogs I follow is Alan's LK&O Railroad mainly due to his exceptional craftsmanship and his modeling of the Akron Canton & Youngstown RR of which I live very close to their former mainline in Akron. In the MRH forum topic, Alan very kindly put together a collection of various blue sky paints used by other modelers. I knew from his blog his color choice was already my favorite and calling my wife over for a second opinion quickly made it unanimous.

I love using Behr paint so off to Home Depot I went for a gallon of Serene Sky 540C-2 in a flat finish.

Two coats later the whole backdrop is painted. I had some concerns about painting the styrene but after sanding the plastic to give it a tooth, it took the latex paint very well. It is absolutely amazing how a sky blue backdrop changes the look of the entire basement. Walking down the steps I feel like I'm walking into another person's train layout!

I definitely learned a lot from phase of layout construction.


But mainly I learned this;

If I could do it over again I would just use the sheet styrene in a .060" thickness and do it exactly like Pierre Oliver on his Wabash layout as described in his blog.

Why? As I mentioned above Masonite is very time consuming and can be difficult to work with. The eight foot sections I was working with can be heavy and unwieldy for one person to easily handle. It must be screwed to the studs or wall and all those screw holes must be countersunk then filled along with the seams for appearances sake. The sanding and sawing is also a huge mess. Using hardboard took me well over a week to complete the section you see in this update.

Even though the cost of the sheet styrene is about three times as expensive as hardboard, I could've completed this side of the basement in as little as two days. Mainly because it's easier to work with, just score and snap with a utility knife to cut the pieces you need. I could use the same Loctite glue to attach it to the studs with the occasional screw or staple for support. Only the joints between sheets would need some bondo putty for a finished look, and not a hundred screw holes to fill either.

Would I trade an extra $60 to be more than a week ahead of where I am now? Absolutely, considering the value of the time I spent working with the hardboard could been translated to other projects.

Anyways if you read this far, thanks!  Next up will be to hang some temporary lighting, finalize the yard plan and start cutting some roadbed.
Posted by Chris Ellis at 12:00 AM