I'll admit there hasn't been much activity lately here on the blog. I can blame the seasonal toll that summer takes on hobby time but not without also accepting my shift to a new career has also taken a bit of steam out of my engine so to speak.

But fear not! There has been some small progress to report.

In places were there wouldn't be a raised gravel profile typical of mainline track, I plan use a rubber sheeting as roadbed material for the flat yards, industry or sidings. I first used this material in my Scenery Test Module and a year later I've found no issues with materials flaking off or becoming unglued to the rubber sheet. As for it's sound qualities, it blows cork roadbed on plywood or "noisy" foam out of the water in sound deadening tests when glued down with adhesive caulk. I'm even considering using it under cork or homasote roadbed for areas where there will be a ballast profile. It makes that much of a difference to my ears on foam benchwork.

Luckily I came across a ton of this material for free when I worked for the local newspaper. The giant rolls of newsprint the press room received on semi-trailers used this rubber sheeting from Allegheny Industrial Associates called a Transmat to prevent the rolls from shifting around inside the trailer. After unloading the trailers this rubber sheeting was unwanted by the truck drivers and was piled up in the dock until thrown away or taken by my co-workers for various home uses. Typically around 2' by 3' in size and a 1/8" thick, I originally used it to cover the back cargo area of my old Jeep until I realized it could be used for model train roadbed! After that epiphany I collected as much as I could before the printing operation was shut down and moved to a neighboring newspaper.

I'm glad I had the forethought then because now years later I'm ready to use it!

First off I needed to clean a few pieces of rubber sheeting I'll use for this first phase of track laying. The floors of semi-trailers are really dirty so a good hosing down was in order.


Next I cut at least one sheet into single track sized strips using a sharp knife and a straightedge. Several light passes were necessary or else the rubber would pull and stretch out of shape when cutting it. 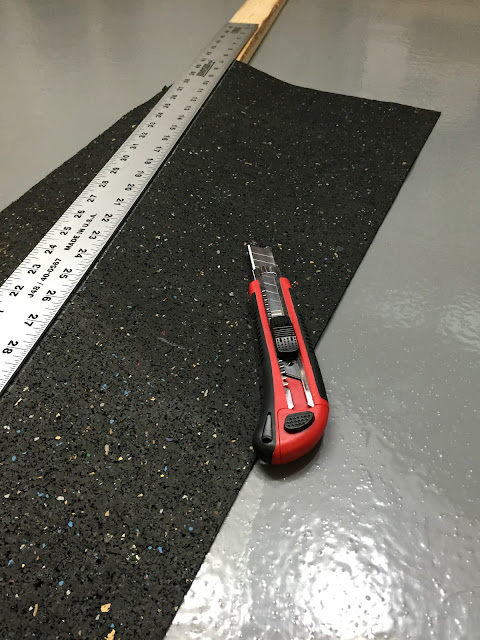 I quickly discovered that the long 3' strips of rubber sheeting didn't really curve very well without slots cut into the strips similar to the flexible homosote roadbed sold by Cascade Rail Supply.
Since the rubber material was already a little tricky to cut and I had plenty of it, I plan on just cutting the shapes I need directly out of the sheets. Truthfully I did slot one strip, and said screw that idea, it was way too time consuming with a knife or scissors...

As a side note, one of the few things I discovered that could mark the rubber material for cut lines and track center lines was a white Prismacolor pencil I originally bought for making chalk marks on freight cars.

The curve starting the Adena Branch off the mainline is an example of just cutting the shape I need instead of trying to slot a strip to make it curve. I found that a pair of good scissors can also be used to cut the rubber sheeting instead of a boxcutter. I can't say however that these are my good scissors, maybe now they are. 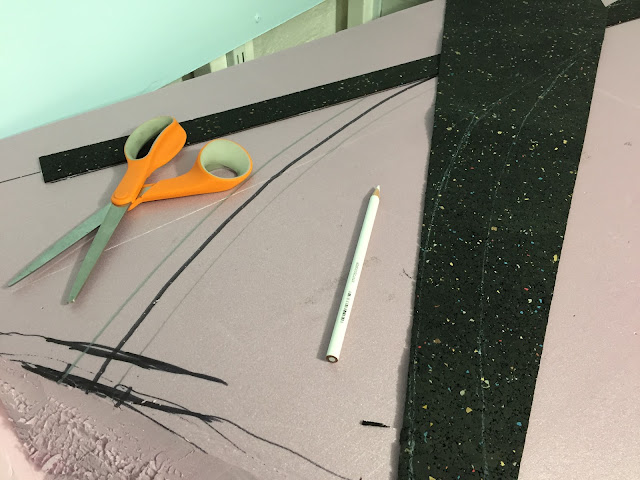 I followed the same procedure gluing the rubber sheeting down as I did in my Scenery Test Module using DAP Clear Kitchen & Bath Adhesive Sealant. 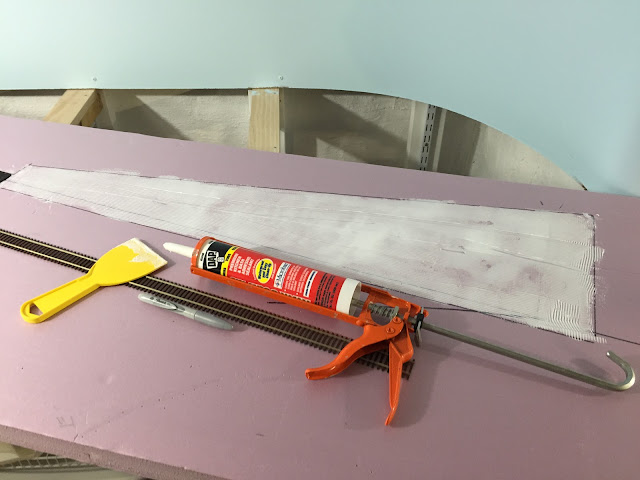 A small kitchen dough roller (now permanently acquired for this task) was used to make sure the rubber sheet was applied and flat.

After gluing a few more pieces of rubber sheeting down, I began to focus my efforts of building up the foam layers to form the terrain that will make up the Adena wye area. I hope to have more on that in another update that shouldn't take as long as this one took to get out on the blog.
Posted by Chris Ellis at 1:09 AM