Once the main line turnouts were laid in place in Track work for Adena Part 1, I turned my attention to the west yard ladder. These were also all #6 turnouts like on the mainline. 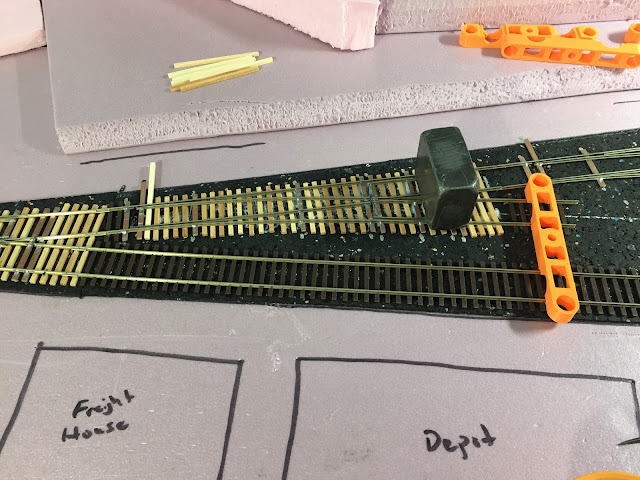 In the above photo the second turnout's ties are being glued down. With this turnout I changed tactics and waited to glue in the headblock ties until the next turnout in line's position was marked and cut to fit. The orange 3D printed track spacer helps maintain the 2 inch track separation. 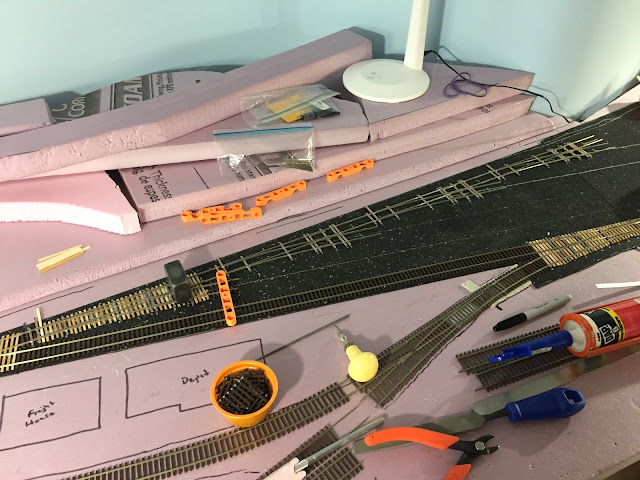 Getting the rest of the yard ladder turnouts position marked for tie placement. 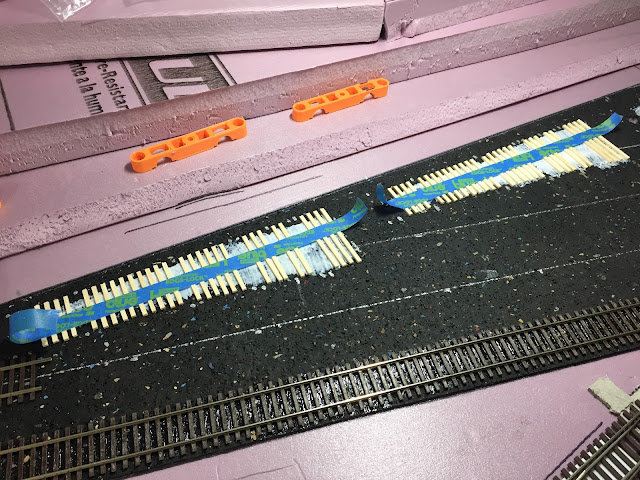 Tie strips have been glued down. Immediately afterward I lay a straightedge down on top of the ties  to hold them in place as I remove the painters tape. Then I lay the turnout on top of the ties and make adjustments before the adhesive caulk sets up. 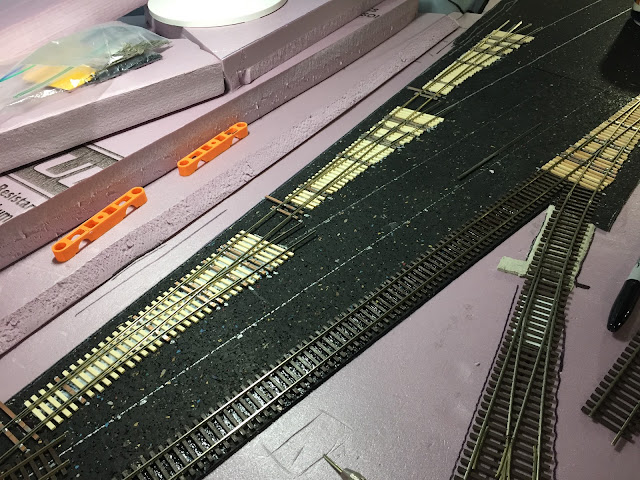 Here's how things size up with other three turnouts fit into place. I'll spike them down after staining and filling the gaps between turnouts with extra Micro Engineering plastic ties. 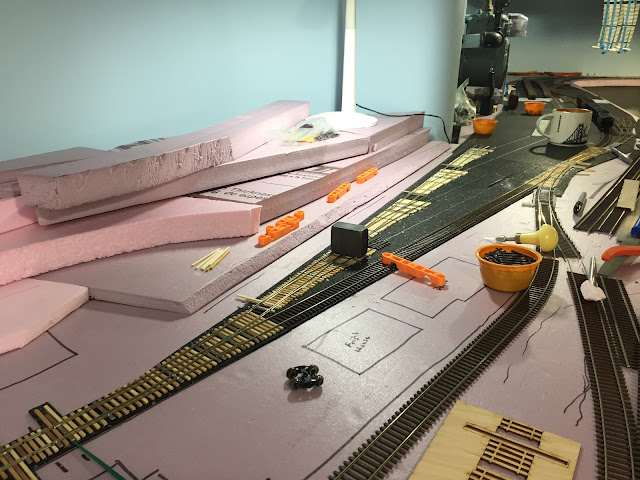 The above photo looks east at Adena and shows the progress so far. 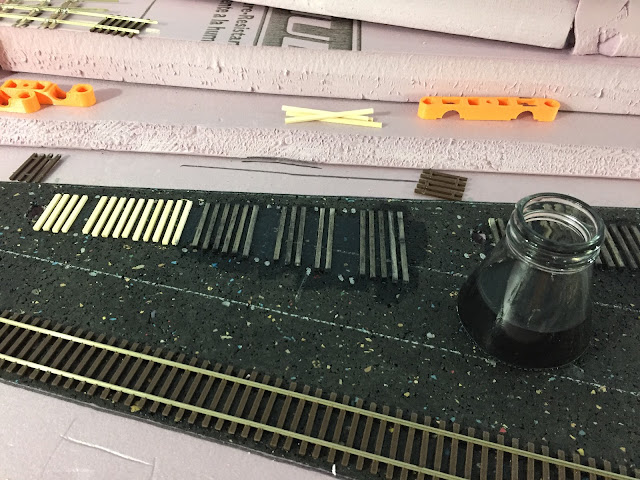 Up to this point I did not stain any of the turnout ties because I was eventually going to paint all my track work with either an airbrush or my trusty Camo Brown spray cans. Since I wasn't sure how soon that would be I decided to give them a quick wash of alcohol diluted India Ink in the meantime. I also went back and stained the other turnouts I already had in place. 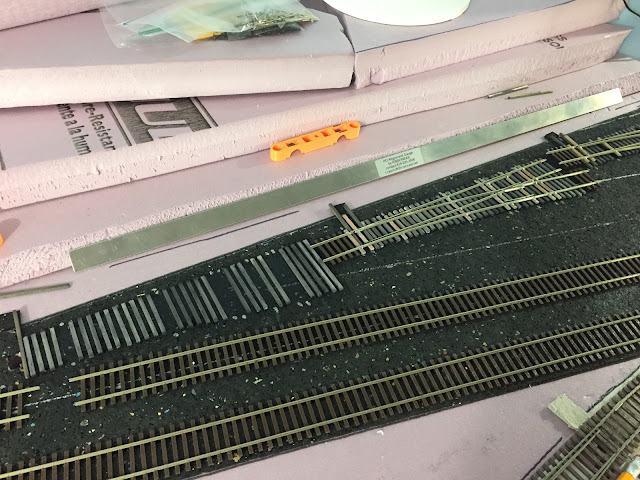 I'm pretty pleased  how the India Ink wash turned out. It almost made me wish I had hand laid all the track with wood ties but I'll save that level of crazy for other people. 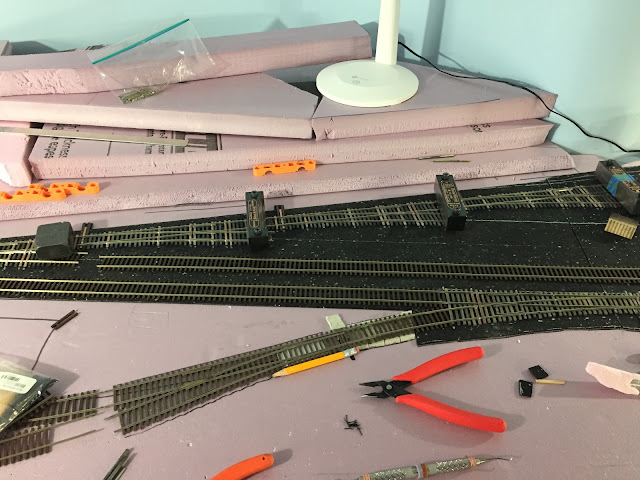 The Fast Tracks turnout building tools pull double duty as weights to hold the rails in place as I started to spike them down. 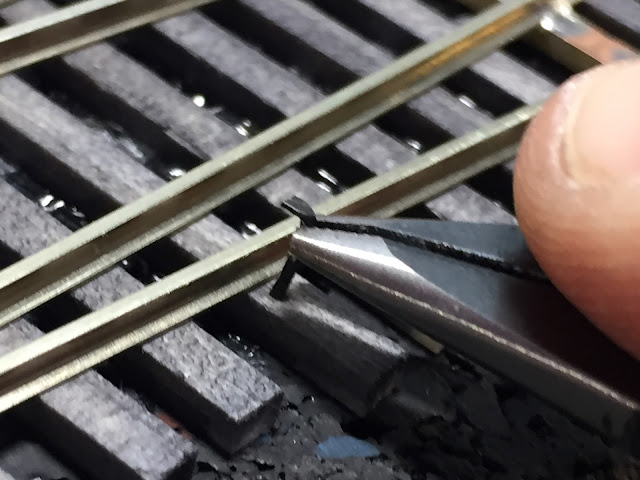 I use Micro Engineering small spikes with a bit of the spike head nipped off with my rail cutters. The pliers are nothing special, just the Crescent brand you can find at Home Depot in a 2-pack with cutters that are almost identical to orange handled Xuron sprue nippers.

I only spike one set of ties in between PC board ties on the turnouts and anywhere else the turnout seems to flex or lift from the ties.

I'm surprised how quick this step can go, and with a steady hand only a few spikes have managed teleport into another dimension.

Next up the east end curved yard ladder.