With the west end turnouts all set I can begin work on the east end yard ladder. My goal is to place the first two mainline turnouts and then connect the main though Adena. Then I can lay the seven yard tracks building of the mainline route.

As you can see below, the valuation map of the west end of Adena yard is fairly straight with a gentle curve to the right after the bridge.


My version of the yard ladder had to be severely curved left in order to fit along the wall. To help with planning I mapped the ladder out with printable Fast Track templates on a large piece of poster board. 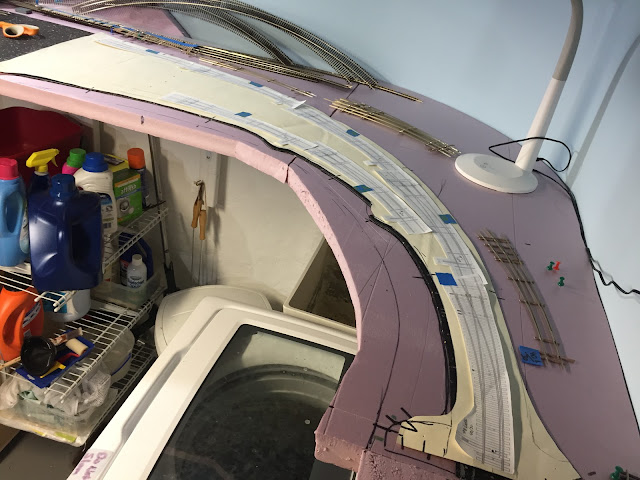 With the fixture in hand I made quick work of making what I needed and started committing the paper template to my rubber roadbed. First up was the #8 40"/30" turnout which beings the main yard. I used a silver sharpie to mark the final position of the turnout and to aid in placing the wood ties. The black sharpie is for marking rail to be trimmed. 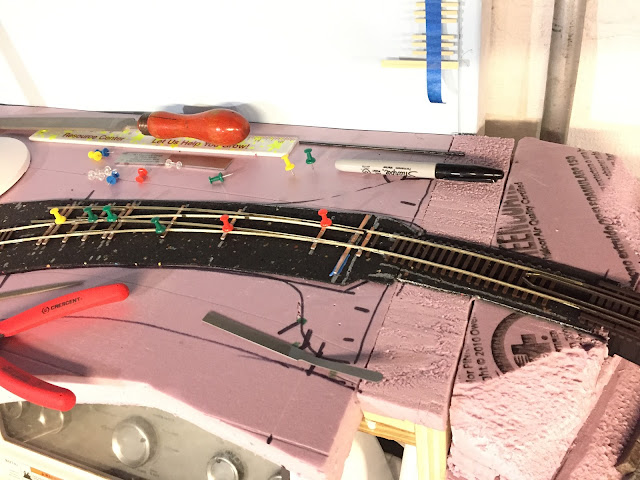 In the below photo the first two mainline turnouts on the east end are in place and the ties have been glued down. 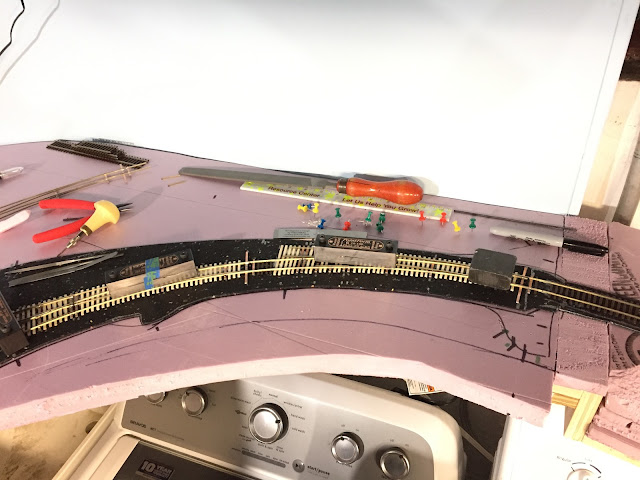 With the eastern mainline turnouts in place it was time to lay the mainline to connect to the other end and establish the curves through the yard. The "Fruit Can Express", as my son calls it, has arrived in Adena to help glue down the main. 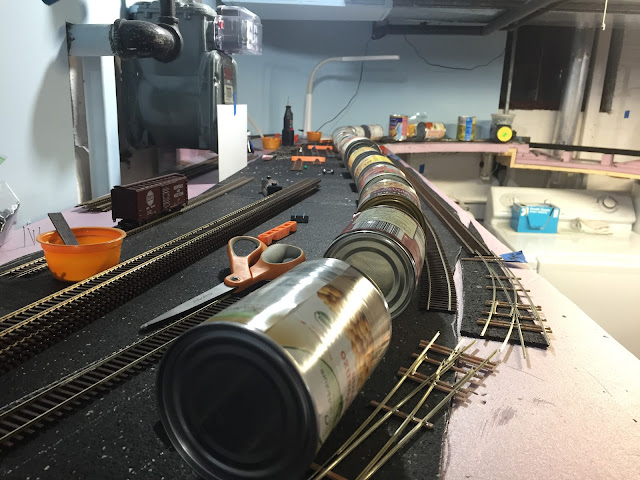 With the main line down I started forming the yard tracks using the orange 3D printed track spacers to maintain a 2 inch spacing. The marks at the bottom of the below photo are the outside rail location for each yard track. 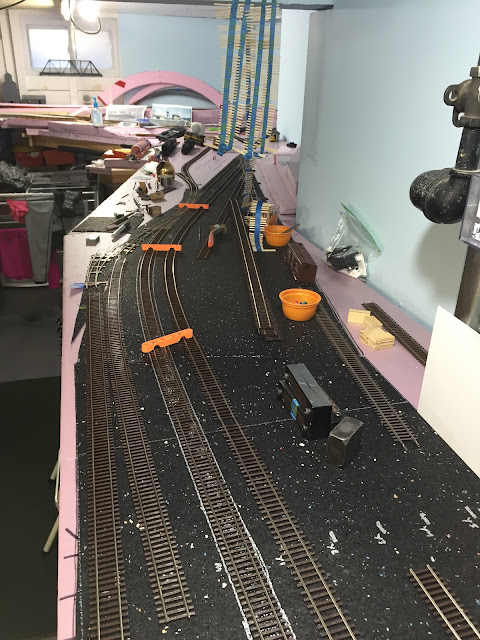 The "Fruit Can Express" parks on yard track 1 during gluing. 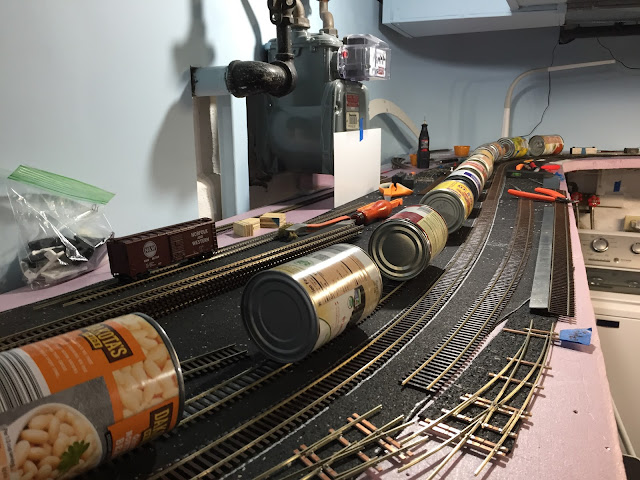 While waiting for the adhesive caulk to dry in between gluing sessions, I began soldering feeders on completed tracks. This way my eager helper could test finished tracks afterwards. 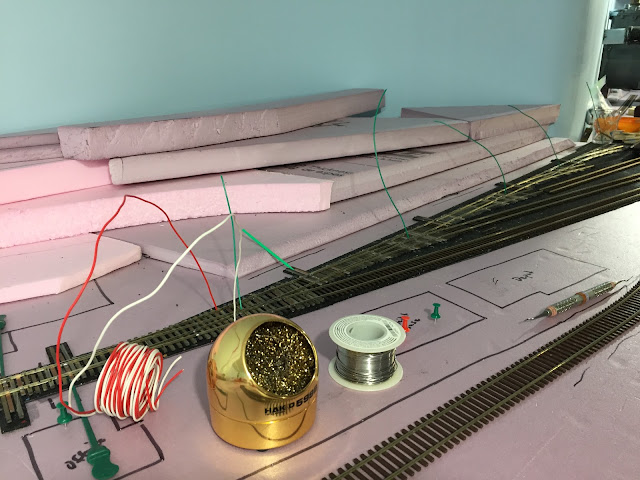 Below, more yard tracks getting spaced and ready for gluing. In all Adena yard is eight tracks wide. I'll also note that for the yard tracks I cut out every 6th or 7th tie and re spaced the ties to give the track more of a secondary look. I apparently had forgotten how much work this was and my thought not to do it again but I'm glad I did. 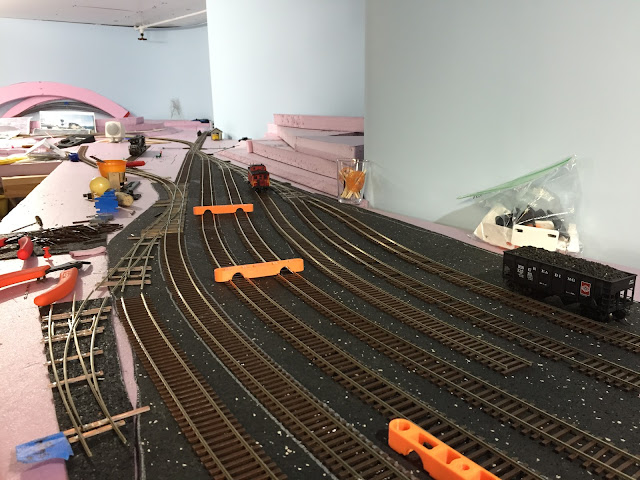 View from the east end of Adena Yard. 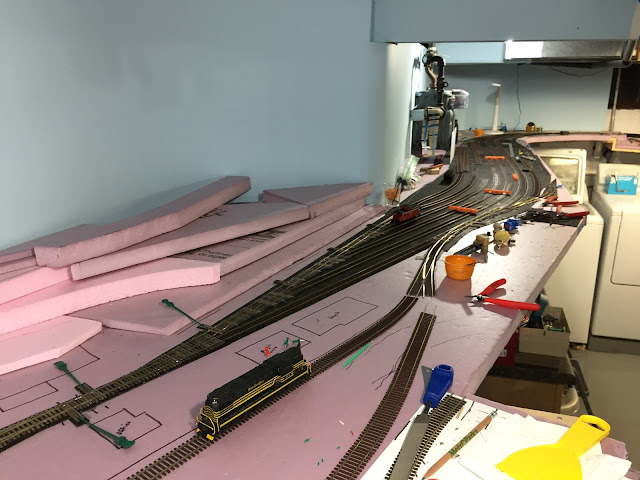 The east yard ladder is almost complete in this photo. 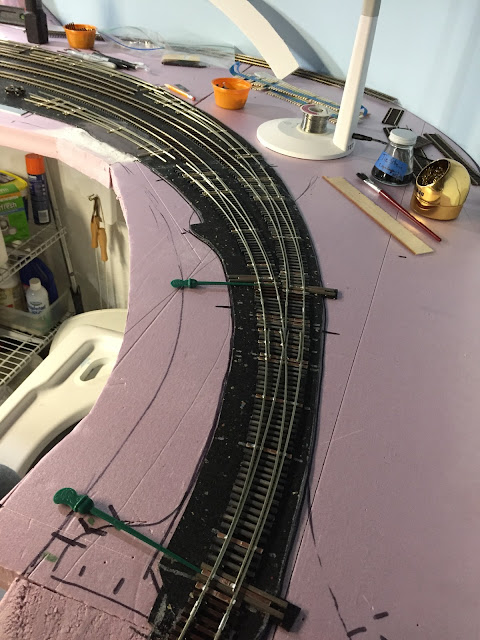 The last switch in the main yard ladder only needed to be a straight #6 since the curve was nearly complete at that point. 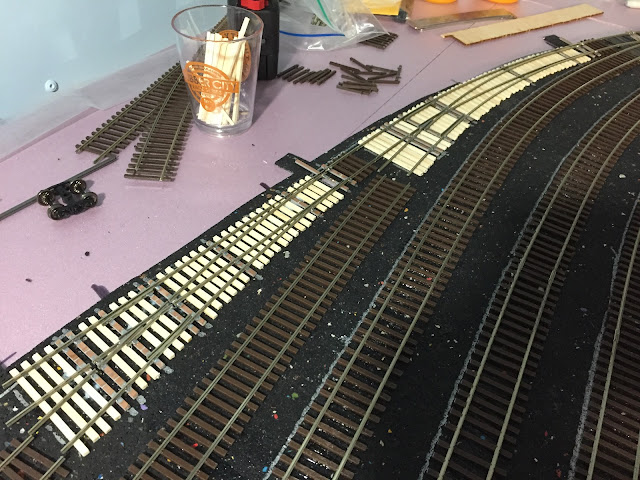 Here's the last turnout for the shorter two south tracks in place. I found a low spot which I filled with flexible spackle and then stained black with my tie wash. 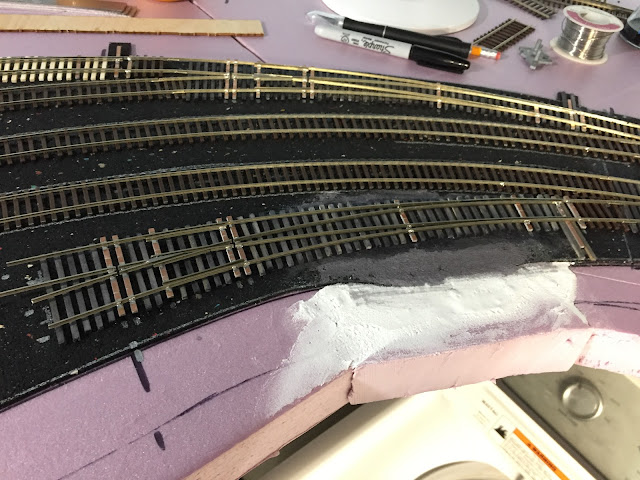 Finally in the below photo all east yard turnouts are in place and stained. I even organized my construction mess a little bit for the picture.
I'll lay the two shorter yard tracks on the right once I have their opposing turnouts installed. But will have to wait for the next part in this series. 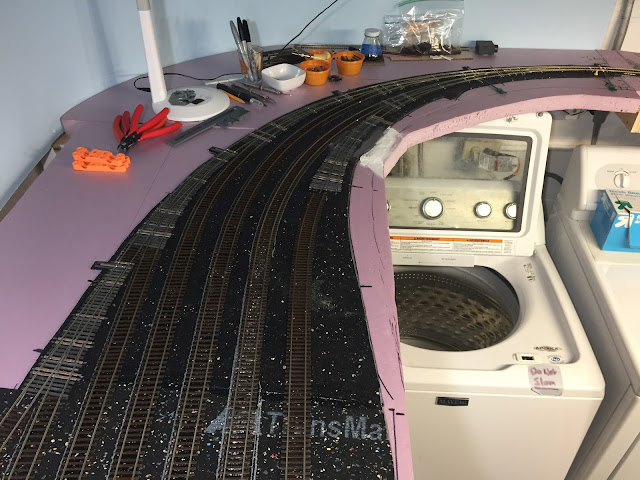