Before falling victim to a terrible head cold this weekend I added a little more to the support structure that will hold the shelf benchwork for the Adena Railroad.

Here's a quick background on why I chose to hang studs from the ceiling. At some point in time my unfinished basement had waterproofing work done that added a layer of concrete over mesh to the existing old tile block walls. Not wanting to disturb this coating by firing cement nails to hold the necessary framing, I decided to simply hang 2x3's from the above floor joists and attach the future shelving benchwork to that.


A while ago I did the easy part where the joists run into the side of the house along the long wall which a full view can be seen here. This has worked pretty good so far, but as I move on there have been lessons learned.

The short stretch of wall that I worked on, lacks the easy attachment points of the floor joist meeting the wall. This called for a different way to attach my support studs.

A topic on the Yahoo Groups Proto-Layouts list by Clark Propst about planning benchwork for his new basement helped with some ideas on how to deal with hanging studs from the two walls of your basement where the floor joists don't meet at the wall.

I ripped a treated 2x4 into a 2x2.5 and butted it against the sill plate of the house. This gave an attachment point for the 2x4 support studs and allowed them to clear the bump out in the wall from the waterproofing work. I'm pretty happy how it turned out. Here's the result.


An article by James McNab in Great Model Railroads 2015 about his similar benchwork style using t-nuts and carriage bolts, provided the idea to switch from the rubber pads previously used to hold the stud to the floor under pressure and go with his method.

Here's the T-nut and carriage bolts I used. 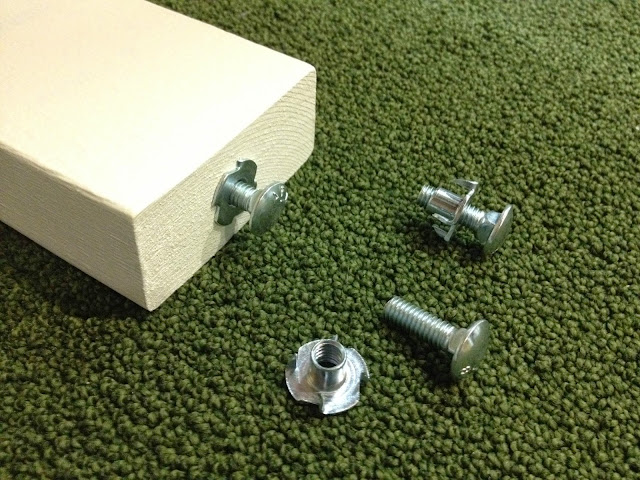 Once the stud was level level on 2 sides, I gave the carriage bolt a couple turns with a wrench to lock it in place. Now if the stud works loose at the bottom from seasonal changes I can make the necessary adjustment to increase pressure.


The final stud I added needed to be at a 45 degree angle to provide extra support around a corner for the potentially deep scene at this location. Once again I borrowed from James's methods and screwed a 1x4 plate in the top of a 2x4 stud. The Stud was then leveled and screwed into place at the top and tensioned in to place at the bottom.

Once I recover from this head cold, I'll tackle two more challenges in attaching studs further on down this wall.