I'll admit a vast majority of my engines and freight cars are clean as a whistle, untouched by the forces of nature and man. Occasionally I've attempted to dirty up and weather a few cars with my airbrush but the experiments were brief and not very satisfying.

Knowing I would have to try a different approach, I asked my Wife for the Pan Pastel weathering sets for Christmas. These are artists pastels that have become all the rage with modelers for their ease of use and range of colors. In fact another fellow blogger, Jim Fawcett, also asked for and received Pan Pastels for Christmas!

Under the tree that morning was the Pan Pastel "Rust & Earth" kit I had asked for! Later on an Amazon gift card from my Mom would take care of the other weathering kit, "Greys, Grime & Soot".

Eager to try them out I grabbed a hopper and started to weather the insides which typically turn rusty colors from the coal and the abuses of loading and unloading.

There has been plenty of press about Pan Pastels including an excellent article by Tony Koester in the November 2013 Model Railroader describing how quickly one can use them to weather a car or engine. One recommended practice is to give the car a coat of a flat finish to give the pastels some tooth to hang on to. This is even mentioned in the instructions that come in a Pan Pastel set.

So guess what instructions I didn't read or magazine articles I forgot reading about in my haste? Not that the rust coloring turned out terrible but the effect was much more muted than I expected. That's when it dawned on me what step I might have skipped. Winter had finally arrived that week so without a paint booth I had to wait a bit to spray some Dullcote on my test models.

During the wait I googled weathering techniques, read blogs and forums looking for tips and tricks. A few interesting examples of using artist oils, washes, chalks and sprays really lit a fire in me to give the multimedia approach a try.

I picked unwanted reefer acquired in a lot as the sacrificial car for this weathering attempt. I thought the car was ugly to begin with so if I fouled this weathering up nothing would change!

The weather warmed up enough I could give the reefer a protective flat coat and spray the underframe, wheels and trucks with the same Rust-Oleum Camouflage Earth Brown I used in my scenery test module.

Before using the Pan Pastels I wanted to try a fade I had read about on The Weathering Shop to tone down the orange by drybrushing white oil paint. During the wait for warmer weather I visited the local craft store and picked up the needed artist oils and other related supplies.

Sadly I didn't take any photos during the weathering process as I mainly worked on the reefer during breaks I took while I've been studying for my CompTIA A+ exams.

In short, I put the white oil dry brush fade on too heavy but the beauty of oils is you can recover from such mistakes. Four or five washes of Raw Umber and Burnt Umber grimed up the sides and several heavy washes of those colors and Burnt Sienna helped give the roof a patchwork rust look. After letting that dry several days I sealed my work with some Dullcote from a rattlecan. Then once that dried the Pan Pastels came out to darken the screens for the refrigeration unit, smooth out the rust colors on the roof and highlight the trucks and underside features.

Here's the near final result.


I think I've found the right path for weathering my models. The ease of using oils and Pan Pastels has gone beyond my expectations for those materials. Over all I'm really happy with my first attempt using the multimedia approach and I've already started on another "sacrificial" car.  I'll move on to my main car fleet once I do a few of these practice runs.

Here's a look at all the supplies I used for this project minus the Rust-oleum Camo Earth Brown spray can I forgot to add in the picture. The glass jar is full of low odor Mineral Spirits used in the washes and brush cleaning. 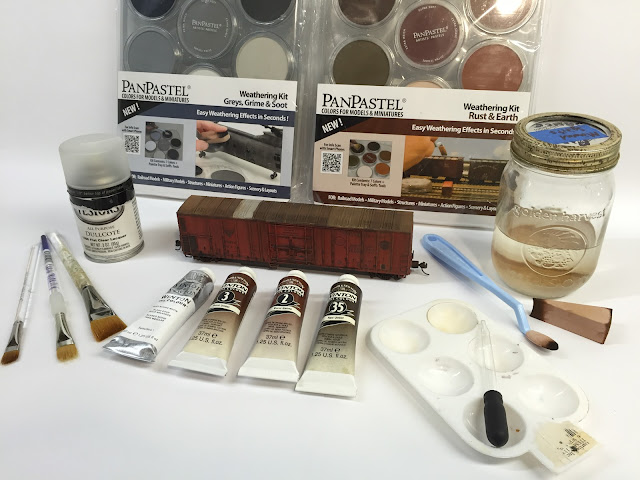 There really isn't much to it, just take time between washes and have lots of paper towels!

Email ThisBlogThis!Share to TwitterShare to FacebookShare to Pinterest
Labels: Freight Cars, How to, Weathering