In the comments for yesterday's Construction Report , Jeff questioned the access to the lower right panel screw for the Breaker Box. That section of the benchwork was attached in a slightly different position than it was built for and did not clear the fuse box as designed. Since I could still open the panel door I thought nothing of it. However after reading Jeff's comments I double checked access to the screw and found that while "I" could get to it, I'm not sure an Electrician could or more importantly would want to.

I don't relish the idea of undoing any part of the layout but this had to be done should we ever need an electrician to open up the breaker box.

The rebuild didn't take very long. I chopped off about 3 inches and screwed the end plate back on. Then I just had to find a larger piece of plywood from my stash leftover from demolishing the old shelving structures when prepping the basement for the layout. I was all done in course of an hour not counting dinner.

Because the gap now measures 19 inches, I'll take a look at bracing the plywood somehow to prevent any future sagging.

In other construction news, yesterday I also started the "future" expansion section for an engine terminal for Pine Valley. I started now partly to help figure out the overall track layout of the permanent section where the Yard Office is located as seen in Wordless Wednesday #111.

Again a 1x4 wood structure and birch plywood end plates to mate with the permanent section comprise the basic construction. When finished it will be 6 feet long and around 40 inches deep at it's widest narrowing to 12 inches at the far end. I still need to add a box frame for where the Walthers 110' Turntable will go.

Here's a look at what the track layout might resemble.

Here's the prototype to help figure things out.

Ambitious? Like other my other ideas for the layout probably, but I also plan to not be in a rush to build this part as it's not critical for operations at first. Then again I didn't think I would build any of it yet and here is a major chunk of it sitting on my basement floor. 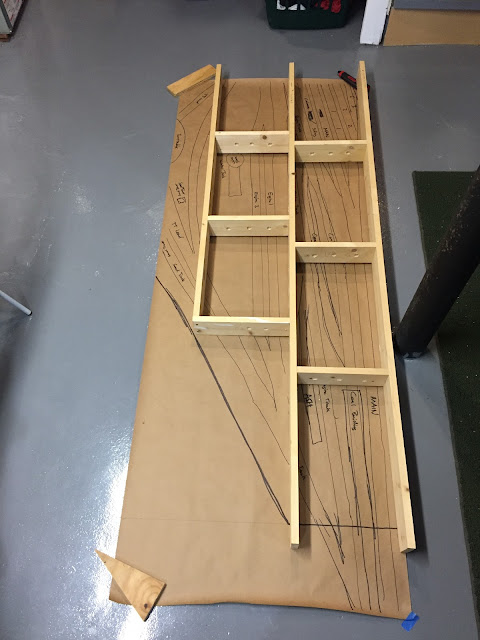 Hopefully I can lay some foam down next on the permanent parts and maybe some legs for the engine terminal.
Posted by Chris Ellis at 12:26 AM