Back to Building Turnouts

Now that I'm getting close to laying track at Pine Valley I knew I should start building the odd ball turnouts I'll need.  Lately I've actually been looking forward to building a few turnouts, I've discovered it to be a very relaxing and meditative process. 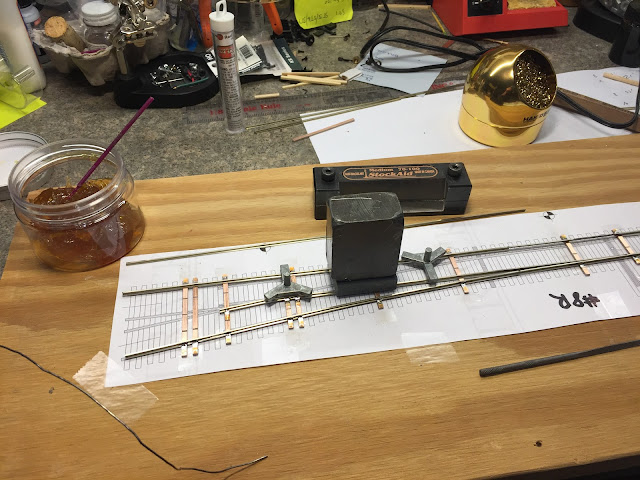 Instead of "warming up" first by building a turnout in my Fast Tracks #6 assembly fixture, I just dove right in on the "freehand" paper template since it was a pretty straight forward #8 turnout.


Although I spent about a total of two hours, construction went smoothly and the the turnout performs flawlessly.  As a side note, I finally replaced the container of flux as the lid was getting impossible to remove due to flux on the cap threads. This jar of Radio Shack flux dates back to my High School days so I'd say it had a good life. I found a nice sized replacement at a local craft store and transferred the still good contents, maybe it will last me another 25 years.

Unfortunately the next night I started on a curved #6 and that didn't go so well. When rolling a truck through the diverging route, the lead wheel will pick the frog point and try to reroute. I've tried filing various frog rails and even unsoldering the whole frog point and moving it in a bit with no change. There were also some gauge issues which I believe is from using curved rail that was made for a different turnout that I never started. I'm torn between trying again to fix it or trash it as a source for guard rails and move on.

Ether way I decide, live and learn.
Posted by Chris Ellis at 10:13 PM